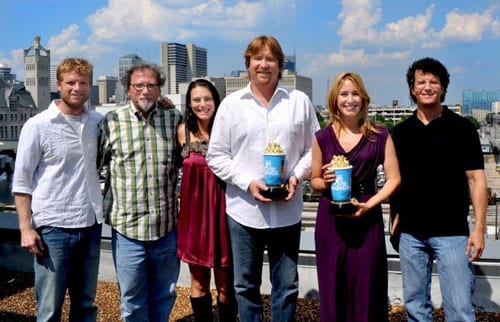 Disney Music Publishing along with Stage Three Music and songwriters Jessi Alexander and Jon Mabe toasted their recent win at the 2009 MTV Music Awards for Best Song From A Movie for the hit single “The Climb” performed by Miley Cyrus. After soaring to the No. 1 spot on both the Billboard and Mediabase AC charts, this smash continues to top the charts for the third consecutive week. It is currently climbing the country airplay charts and is one of the best-selling songs with more than 2 million downloads to date.

“Wow! I never dreamed I would have a golden popcorn to put on the piano,” said Jessi when hearing of the win. “Seriously, I’m incredibly honored to know this song has reached so many people and continues to be a fan favorite.”

Produced by John Shanks, “The Climb,” is from Hannah Montana: The Movie and the accompanying Platinum selling soundtrack.