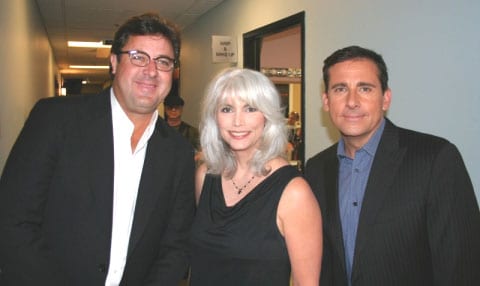 From left: Vince Gill, Emmylou Harris and “The Office’s” Steve Carell backstage at “The Jay Leno Show” (9/30/09). Gill and Harris were in Los Angeles to perform at a benefit for The Country Music Hall of Fame at Club Nokia. Photo: Rique

Nashville musicians are making the media rounds. See where your favorite artists are set to turn up.

Kenny Chesney will perform for the full hour of PBS’s Austin City Limits on Oct. 17. Joining him will be good friend and fellow CMA Vocal Event nominee Mac McAnally (for “Down The Road”). The concert will be taped at University of Texas, and include plenty of hits as well as the never-before-performed “Somewhere In The Sun.”

Dierks Bentley will take a detour from Brad Paisley’s American Saturday Night tour this week to perform his hot new single “I Wanna Make You Close Your Eyes” tonight (10/5) on The Tonight Show with Conan O’Brien, and The Late Late Show with Craig Ferguson the following day (airing Oct. 12). To watch the intimate video for the new single click here.

Steve Martin and the Steep Canyon Rangers will be on The Late Show with David Letterman tonight (10/5) on CBS, and on The View tomorrow (10/6) on ABC. The Rangers’ new Rebel Records release, Deep in the Shade, will be in stores tomorrow. 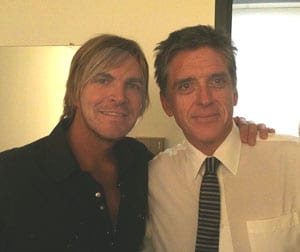 Jack Ingram stopped by “The Late Late Show with Craig Ferguson” last week to debut his new single “Seeing Stars.” The show is set to air tonight 10/5)  at 12:35 AM/ET.

Trace Adkins will make several media appearances while he’s on the East Coast next week. Today, (10/5) he’ll visit political commentator Glenn Beck on his daily radio show, and guest on his television show later this evening. On Tues., Oct. 6, Adkins will appear on Fox & Friends, on the FOX News Channel and perform an acoustic version of his latest hit single, “All I Ask For Anymore.”

Brooks & Dunn perform greatest hits, as well as new music from their album, #1s…And Then Some, when Invitation Only: Brooks & Dunn premieres Friday, Oct. 30 at 10 PM/ET on CMT. Taped in Nashville just days after announcing their split, the show features the duo performing before a small studio audience, taking questions from fans and delivering revealing and candid answers.

Derek Sholl appeared on FOX’s Fox and Friends on Friday, Oct. 2 and is set for the syndicated morning TV show Daytime on Wednesday, Oct. 7. New artist Sholl is working to bring attention to combat veterans who are struggling to readjust to life at home. His new music video for “When They Come Back” debuted yesterday on GAC.