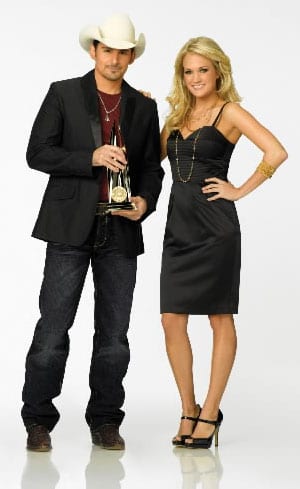 Brad Paisley and Carrie Underwood will return as co-hosts of the CMA Awards when the show airs live from the Sommet Center Wed., Nov. 11 on ABC. They are the respective reigning Male and Female Vocalist of the Year. See the full story at People.com.

Fans can log on to see Tweets from artists including Trace Adkins (@traceadkins), Dierks Bentley (@dierksbentley), Lady Antebellum (@ladyantebellum), Martina McBride (@martinamcbride), Reba McEntire (@Reba), Kellie Pickler (@therealpickler), and the Zac Brown Band (@zacbrownband). Each artist will be posting their observations about the show as well as behind-the-scenes tidbits, anecdotes about other artists performing on the show, as well as memories from past Music Festivals.

“Twitter is one of the best ways right now to directly connect with fans – especially ones on the cutting edge of technology,” said Dan Bowen, CMA VP of Strategic Marketing and Communications. “We’re excited to work with ABC.com to be able to bring a great group of Country Music artists together with their current fans and hopefully some new ones.”

The “Tweet ‘N’ Greet” will create an interactive feed between the fans and artists. Fans will have a direct connection to some of their favorite performers, not only allowing them the opportunity to ask questions, but also providing them with behind-the-scenes access. In addition, CMA (@CountryMusic) will be updating fans with information on the participating artists’ upcoming album releases, tour dates, and appearances.