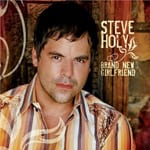 It’s good to know that country music hasn’t lost its sense of humor.

Both Rodney Carrington and Phil Vassar are tickling the funny bone with new singles this week. Rodney’s hilarious outing is produced by none other than Toby Keith, who also co-wrote two of the tunes on the comic’s El Nino Loco CD.

The other “must add” sides this week come from Gary Allan, Sarah Buxton and our Disc of the Day winner, Steve Holy.

GARY ALLAN/Today
Writer: Tommy Lee James/Brice Long; Producer: Mark Wright & Gary Allan; Publisher: none listed; MCA Nashville
-He’s such a superb performer that he makes even this routine spin down Music Row sound like an epic. I remain a fan.

SABLE/Coming Home
Writer: Jeff Sable/Chris Sable/Jake Hanselman; Producer: Jeff Sable; Publisher: UbarEnt. no performance rights listed; American Eagle (www.sablecountry.com)
-I like the contrast between the intimate, hushed vocal quality in the verses and the throttle-wide-open tenor singing in the choruses. The song has hooks a-plenty, and the tempo production is just right.

JASON ROGERS/Thinkin’
Writer: Jason Rogers; Producer: Martin Young; Publisher: BlueBuck, ASCAP; Blue Buck (track) (www.jasonrogerscountry.com)
-This native Canadian’s CD kicks off with this thin-sounding bopper. His vocal was recorded too dry, the track is quite spare and the song won’t blow you away.

PHIL VASSAR/Bobbi With An I
Writer: none listed; Producer: none listed; Publisher: none listed; Universal South (ERG)
-Hand claps and grinding “party” guitar kick it off. And then the fun plot kicks in. In the daylight, this bruiser linebacker drives a tow truck and brawls. At night, he’s in drag in the bar in a pink party dress. You don’t dare give this “big boned girl” any grief about it, because he bench presses 335 pounds. Phil’s wise conclusion is to live and let live.