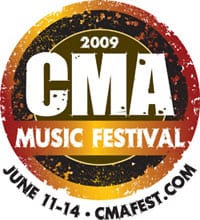 Country Music takes center stage when CMA Music Festival: Country’s Night to Rock airs Monday, Aug. 31 (8:00-11:00 PM/ET) on the ABC Television Network. Filmed in Nashville June 11-14, the special has been expanded to three hours. Kenny Chesney, Kid Rock, Lady Antebellum, Brad Paisley, Darius Rucker, Sugarland and Taylor Swift are the first performers to be confirmed, with more artists to be announced soon. This year an average of 56,000 fans attended each day of CMA Music Festival, its biggest turnout yet. CMA Music Festival: Country’s Night to Rock is executive-produced by Robert Deaton and directed by Gary Halvorson.

In related CMA news, ballots for the Nominating Round of the CMA Awards will be emailed out tomorrow (6/30). Below are the changes for the upcoming CMA Awards:
• The top 20 qualified vote recipients on the Nomination Ballot will advance to the Second Ballot in categories 2-12. In category 1 (Entertainer of the Year), the top 15 qualified vote recipients will advance to the Second Ballot.
• The Horizon Award is now the “New Artist of the Year” Award.