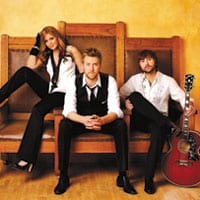 Lady Antebellum has scheduled several upcoming national television performances, including NBC’s The Tonight Show with Jay Leno on Jan. 22, and a two-song performance on The Early Show’s “GRAMMY Concert Series” on CBS, Sat., Feb. 7. Additionally, in anticipation of the Grammy nominated band’s opening slot on Kenny Chesney’s Sun City Carnival tour of arenas and stadiums, Lady A will be featured on DirectTV’s Concert Series through March 15. “I Run To You” is the third single from the trio’s hit debut album and is working its way up the Country Breakout chart.