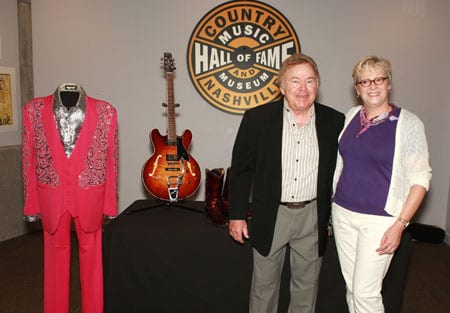 Country Music Hall of Fame member Roy Clark donated several items to the Country Music Hall on Fame® and Museum on Saturday (7/18). The artifacts, which will be on display beginning August 1 in the Museum’s permanent exhibit, include a magenta three-piece Manuel suit with an embroidered silver lame´Manuel shirt, patent leather Tony Lama boots, and a Heritage H-535 Roy Clark Signature model electric guitar.

Mercury Nashville recording artist Billy Currington will perform on CBS’ the Late Show with David Letterman Wed., Aug. 19. His single “People Are Crazy” tops the monitored charts this week, marking his fourth No. 1 and fastest-rising single of his career. It is the second No. 1 from Currington’s album Little Bit Of Everything, which is at No. 10 on Billboard’s Current Country Albums Chart.
——————————–

A new radio show bringing together college football and country music is looking for guest artist hosts. College Football Country will hit the airwaves this fall, hosted by a different artist each week, highlighting their favorite college or alma mater’s game. For hosting opportunities, contact Kara Bullock at Atlanta based AIM Marketing Solutions 404-581-7114 or [email protected]

The legendary Flatlanders— Joe Ely, Butch Hancock and Jimmie Dale Gilmore —  appeared on The Late Show With David Letterman last night (7/21) before heading overseas for a three week tour of Europe. Upon their return, the New West Records band will be on NPR’s Mountain Stage on Aug. 16, and debut at the Grand Ole Opry on Sept. 18.

August 7-9 will be a tax free weekend in Tennessee. Exemptions include clothing $100 or less per article, computers $1500 or less, and school supplies $100 or less.