Dierks Bentley’s fourth studio album, Feel That Fire, tops the new SoundScan country albums chart with first-week sales of over 71,000 units. It racked up enough scans to also secure the No. 3 spot on the all-genre chart.

The lead single and title track recently finished a multi-week run at the pinnacle of MusicRow’s Country Breakout Chart. Catch Bentley tonight (2/11), performing “Life On The Run” on NBC’s The Tonight Show with Jay Leno. He follows that with a two-week Canadian run with Brad Paisley through the end of February. 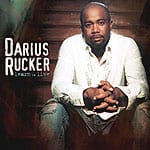 Darius Rucker’s debut country album on Capitol Records Nashville has been certified Gold. Released in September 2008, Learn To Live debuted at No. 1 on the country albums charts with over 60,000 units. Since then it has remained in the Top 15 and produced the two-week No. 1 single “Don’t Think I Don’t Think About It,” and the follow-up Top 10 and climbing hit “It Won’t Be Like This For Long.”

Sugarland was in Los Angeles rehearsing for the Grammys last week when the duo was surprised with Platinum plaques for their latest album Love On The Inside, released in July 2008. The Mercury Nashville pair captured their first Grammy Sunday night for Best Country Performance By A Duo Or Group With Vocals for “Stay.” Nettles also won Best Country Song for the self-penned hit which has garnered ACM, CMA and CMT awards, and sold over 980,000 digital copies. The duo’s next single will be “It Happens.” 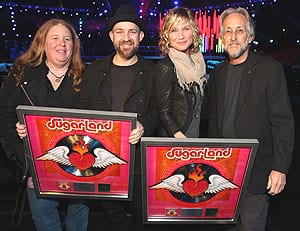