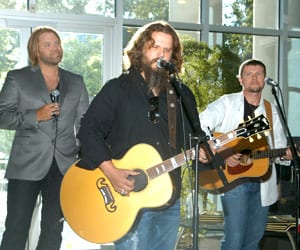 The readers have spoken, and they have class.

Both Jamey Johnson and James Otto were double winners at this year’s MusicRow awards ceremony. Jamey won the Breakthrough Artist award as well as the Song of the Year prize for “In Color,” co-written with James and Lee Thomas Miller. Because James also co-wrote his big hit “Just Got Started Loving You” he was named this year’s Breakthrough Songwriter.

“We put pieces of our own lives in it,” said Jamey of “In Color.” “That’s what songwriting is supposed to be about, isn’t it?”

“It’s been 12 years in Nashville, and one great year,” said James. He thanked his mom, his wife and publisher Tracy Gershon.

“I’m going to write an article about perseverance,” said Doak Turner. “As soon as I heard James say that, I was inspired.”

“This is one of our favorite events,” said Ralph Murphy welcoming the crowd to the host venue, ASCAP. “Mr. David Ross has built a career on integrity and its spirit of perseverance and dedication.”

“This is our 21st MusicRow Awards,” said Boss Ross. “We are here to celebrate the core of our industry’s creativity and its spirit of perseverance and dedication.”

Representing the AFM, newly elected treasurer Craig Krampf addressed the gathering, saying, “What an incredible, special town we have in Nashville. None of us should ever take it for granted. Congratulations to our winners. We’re very proud of you.”

Prior to the ceremony, Craig said he’d gone over the books and found that the first quarter of this year has been the third most lucrative in this AFM chapter’s history. Considering the economic times, that’s saying quite a lot.

MusicRow’s Jon Freeman and Sarah Skates presented this year’s Musician Awards. These were first presented way back in 1989 and remain the only honors given to Music City’s session musicians.

“I remember when you and I had a future in this town,” quipped bass winner Glenn Worf to me before the ceremony. He has won his honor every year since 1992.

Ilya Tonshinsky (guitar) and Gordon Mote (piano) were first-time winners. “I didn’t expect this at all,” said Ilya. “We actually get to make a living playing!” exclaimed Gordon. Previous 13-time winner Steve Nathan was there to congratulate Gordon, which I thought was incredibly endearing. As well as undeniably classy.

Fiddle winner Jonathan Yudkin gave a shout-out to the mag. “We have to maintain a level of awareness of what’s going on,” he said. “David Ross and MusicRow do an excellent job doing that.” It’s the truth.
“Keep my number handy,” said session vocalist winner Wes Hightower. He has won his category every year since 2001. As is the custom, Christie King handed out the framed awards and Alan Mayor snapped away.
Winners not present were steel guitarist Paul Franklin, engineer Justin Niebank and drummer Shannon Forrest. Chris DuBois accepted for Producer of the Year Frank Rogers, who is on vacation, “on a beach somewhere, hopefully with his shirt ON,” said Chris.

Many commented that they love the event because they get to have reunions with folks they don’t see often on the Row.