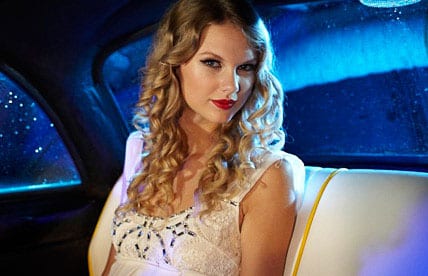 You can also catch Swift on Sunday night's (9/13) MTV VMAs. Pictured here in an ad for the Awards show.

Just three years after the release of her debut album, Taylor Swift has surpassed the 10 million milestone for album sales. The 19-year-old’s sales tally is comprised of actual full albums sold and doesn’t include track equivalent albums (TEA), which is made up of paid downloads. Additionally, Swift has sold over 20 million paid song downloads, more than any other Country artist.

Swift, who pens all of her own material, released her now quadruple-platinum self-titled debut album in October 2006 on Big Machine Records. She followed it up with Fearless two years later, which has also sold 4 million copies in the US. It has also earned Gold and Platinum certifications in fourteen countries. The singer-songwriter has had singles top both the Country and Pop radio charts, and sold more albums last year than any other recording artist, in any genre of music.

Here’s how she got to the 10 million mark (sales figures provided by Big Machine Records):