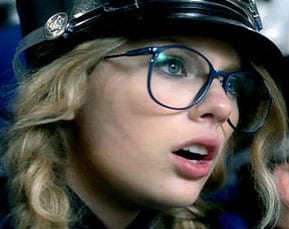 Taylor in the video for "You Belong With Me."

MTV today (8/4) announced the nominees for the 2009 MTV Video Music Awards, with several Nashvillians making the list. Up for Best Female Video is Taylor Swift’s “You Belong With Me,” directed by Roman White and produced by Revolution Pictures, with Producer Randy Brewer. Kings of Leon (“Use Somebody”) and Paramore (“Decode”) are both nominated for Best Rock Video. Meanwhile, Miley Cyrus’ “7 Things” is up for Best Editing.

The women lead the pack as Beyonce and Lady Gaga earn nine nominations each: Beyonce for “Single Ladies (Put A Ring on It),” and Lady Gaga for “Poker Face” and “Paparazzi.” Britney Spears follows with an impressive seven combined nominations for “Womanizer” and “Circus.”