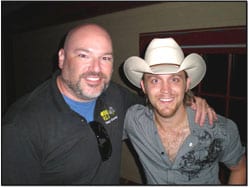 Justin Moore’s self-titled debut album for The Valory Music Co. entered the Billboard Country Album Chart this week at No. 3, making it the second highest country debut of a new artist this year. Selling over 34,000 units, it was also the No. 10 release across all genres on the Billboard Top 200 Chart.

On release day, the album quickly peaked as the second most downloaded Country album at iTunes, behind only George Strait. Moore’s album also rose to the No. 8 most-downloaded album of all genres on iTunes.

Driving the sales is hit single, “Small Town USA,” which lands at No. 3 on this week’s MusicRow Country Breakout chart. “Small Town USA” also rises to No. 7 on the Billboard Country Songs Chart this week. The climb makes the rising star one of only three new country artists to enter the Top 10 so far in 2009.