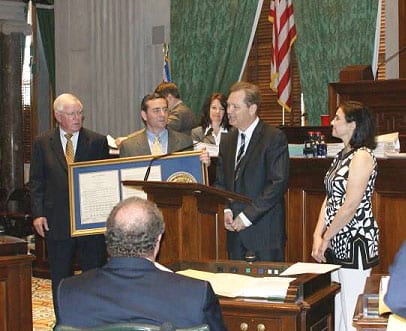 The Tennessee State Legislature honored Steve Wariner on May 28 with Senate Joint Resolution 469. The resolution recognizes Wariner as “a Renaissance man by any standard…a recording artist, touring performer, songwriter, publisher, producer, record executive, an avid painter and a true humanitarian” and commends him “for the significant contributions he has made to the growth of country music.” The resolution also commends Wariner for honoring Chet Atkins with his upcoming release, Steve Wariner. c.g.p., My Tribute to Chet Atkins, and for giving a benefit concert on July 7 at the Loveless Barn for the Chet Atkins Music Education Fund.

————————-
Former rpm management Director, Artist & Brand Development Jill Gleason is changing jobs Monday to become Exec. Asst. to Stroudavarious Records President Bill Catino. She also spent many years at Curb before joining rpm. She can be reached at [email protected]…rpm Management Chief Strategy Officer Ryan Bitzer has also left his role, but will remain on as a consultant for the company. He can be reached at 615-967-7010 or [email protected] rpm’s flagship client Tim McGraw recently moved to Red Light Management, which most likely led to the company’s downsizing. In related news, Jay McCarthy, former PD of KMLE/Phoenix, has joined Red Light Management and will be McGraw’s representative to Country radio. He can be reached at 615-279-3784 or [email protected]