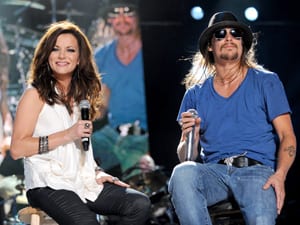 Friday always seems, to me, to be the busiest day of the CMA Music Festival. On Wednesday and Thursday, the faithful gather. On Saturday and Sunday, they disperse to various Fan Club parties or find other ways to amuse themselves in Nashville “off campus.” But on Friday, they’re still fresh, ready to party and clustered together downtown.

The day was bright and sunny as I hit Lower Broadway. At the Hard Rock stage, brawny Stephen Dale had one couple dancing merrily in front of his stage. Riders in the Sky, who followed, kept the mood upbeat. Back for another year, The Naked Cowboy was entertaining fans in front of Cadillac Ranch, wearing only his boots, hat, guitar and underpants.

The Riverfront stage had the afternoon one-two-three punch of Eric Church, Craig Morgan and Randy Houser, stand-up singers one and all. Eric’s fans screamed wildly and sang along to every song. “Need God? Go to Church,” read one fan’s sign. “Church Revival” read another. With five separate shows, Eric was the most performing artist of the festival.

Taking it all in backstage were Steve Buchanan, John Peets, Judy McDonough and Jeff Walker. Steve had to leave early because Pam Tillis was autographing in Gaylord’s Opry Originals gift shop.

Here’s a sign of the times. Remember that huge book and record shop that took up half of the far wall in the hall? Gone. Instead, there was a postage-stamp sized Barnes & Noble booth with a few dozen selections.

Outside the Hall on 5th Avenue North, the members of Rio Grand were posing for snaps in front of their brightly painted tour bus.

Kate & Kacey were harmonizing on the Sommet Stage. Cherryholmes later ended the day there. The family bluegrass band is that rare act who played both the CMA Music Festival and Bonnaroo last weekend. Inside the Sommet Center’s “needle,” an acoustic stage was set up for the “Second Friday Songbirds” songwriters.

In the smaller Family Zone tent, ABC soap stars were autographing and Chuck Wicks was in the midst of a fan Q&A session. He deftly dodged a query about when he and Julianne Hough will marry. “We’re happy with our relationship the way it is,” he said. He also suggested that the thing to do might be to wed during next year’s event. “Wouldn’t that be a festival?” he asked the fans. Behind him, in the big Family Zone tent, yodeling Taylor Ware and others were making “country music for kids.” 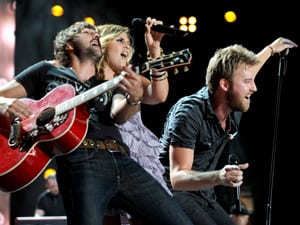 Big-head Cabbage Patch Kids characters were posing for photos. One Family Zone tent was for gathering citizens’ used musical instruments for use in Metro schools. Over at the nearby Rutledge on 4th Avenue South, former American Idol rocker Bo Bice hosted his first fan club party as a country performer.

Lady A performed splendidly, as did Luke Bryan, Little Big Town, Jake Owen, Jason Aldean and The Zac Brown Band. Rodney Atkins sang a snippet of “I Can See Clearly Now” as an intro to “If You’re Going Through Hell.” Martina McBride turned up to sing “Picture” with concert closer Kid Rock.