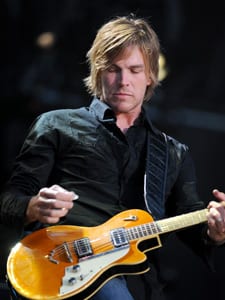 Sunday Fan club activities began in the morning for Jo Dee Messina at The Belcourt Theater and concluded with Pam Tillis at The Wildhorse Saloon that evening.

In the Sports Zone downtown, we had the fourth annual Michael Peterson Celebrity Tractor Race, sponsored by New Holland. The man to beat was last year’s champ, Darby Ledbetter, a country record maker who is also a three-tour veteran of the Middle East. Mark Collie, Megan Munroe, Richie Fields, Chuck Leavell, lead singer Adam Craig of TelluRide and dozens of other contestants tried to unseat him. But Darby prevailed for the second year in a row. Joey & Rory competed. Rory Feek can wear all the overalls he wants, but his wife Joey Martin’s tractor-race time was better. By the way, the tractors ran on Biodiesel fuel.

It was so humid on Sunday that even a short walk would leave your clothes soaked. Nevertheless, the outdoor attractions at Riverfront included Larry Gatlin & The Gatlin Brothers, fast-rising Gloriana, the Eli Young Band and Darryl Worley. Booked at the Hard Rock were Matt Stillwell and The Block Family Band, among others. At the Sommet stage, your choices included The Grascals, Bomshel and T. Graham Brown. Inside the Sommet Center, rehearsals were underway for Tuesday’s CMT Awards. There’s no rest for the weary.

Sage Keffer was slated to open and Miko Marks to close at the final day in the popular, air-conditioned Acoustic Corner. I always feel a twinge of sadness on Sunday afternoon when the booth dismantling begins in the Convention Center. It’s like the circus is folding up its tents.

But there was still one more evening of music and memory making to go at LP field. Soaking up the final concert in the hospitality suite were Dale Bobo, Bill Bennett, the Chamber’s Butch Spyridon, Steve Moore, former vice mayor Howard Gentry, Ben Farrell and Charlie Monk. Bobby Cudd brought his teen daughter to see Taylor Swift on the big stage. Dan Ekback reported that he has a new publishing gig, with Platinum Pen. 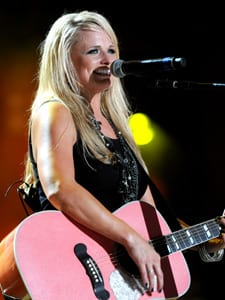 Now it can be told: the suite’s annual bartender turns out to be “Rockit” Roger Richardson. His single “The First Cowboy in Space” was reviewed in last Friday’s “DisClaimer” column and is available on the current CDX.

The jets roared overhead one last time. Jack Ingram kicked off the show. On “Barbie Doll,” everyone sang along. For “Barefoot and Crazy,” they were on their feet. During “Love You” Jack waded into the crowd, singing and high-fiving fans. Co-host Melissa Peterman observed, “I’ll be his Barbie Doll any day.” Heidi Newfield did an acoustic set. She committed the perennial error of wearing black on the black CMA Fest stage, rendering her nearly invisible. Impending Opry cast inductees Montgomery Gentry were up next.

Co-host Lance Smith brought on Miranda Lambert. The fiery Miranda informed the stadium that she’d come all the way from the Lone Star State to show them how it’s done, “Texas style.” Taylor Swift was next, followed by a surprise appearance by Sugarland. Then came Kenny Chesney, a bunch of beach balls and the end of another fabulous Fest.