The CMA Music Festival always starts before it’s supposed to. There has already been plenty of activity, including a superstar sighting.

Alan Jackson isn’t “officially” playing the fest this year, but Wednesday night (6/10) he took over Cadillac Ranch on Lower Broadway to celebrate his 20th anniversary. It was this month in 1989 that he signed his recording contract with Arista Records.

“This is a great way to start the CMA Music Festival,” said Nashville Mayor Karl Dean. “He’s a great artist with a great career.” Dean brought on the CMA’s Tammy Genovese, who in turn introduced the crowd to Kix Brooks.

“We’re on the same record label,” said Kix. He recalled that Alan was already at Arista when he arrived. The company didn’t want two more male solo acts, so Kix and Ronnie were combined to create Brooks & Dunn. “I’m proud to call him my labelmate.”

“We’ve been down a lot of roads together at Arista Records,” responded Alan. “This is too much attention for an ol’ country boy – 20 years at Arista, it’s hard to believe. We’re gonna play you some music, keep it laid back and see what happens.”

While cell phones and cameras flashed, he kicked things off with “Here in the Real World,” “Gone Country,” “I Don’t Even Know Your Name,” “Living on Love,” “Tall Tall Trees” and “Like Red on a Rose.” By the way, Alan’s current “Sissy’s Song” is his 50th top-10 hit.

Fans got in on a first-come, first-serve basis. Dozens who didn’t make the cut, stood outside on the sidewalk listening and hoping for a glimpse of the towering Alan.

Every honky tonk on Lower Broad was blasting music out the doors into the breezy evening air. In addition to Cadillac Ranch, the one to be inside was Robert’s Western World. That’s where former BR5-49 frontman Chuck Mead was celebrating his solo CD. 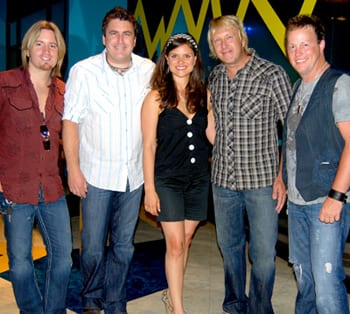 The throng stretched along both sides of Broadway from 8th to 3rd Avenues. After rounding the corner of 3rd and Demonbreun, the paraders were greeted by another large crowd at the Country Music Hall of Fame and Hall of Fame park. This event drew far more fans than ever before.

Nashville motorcycle cops came down Broadway in formation, with blue lights flashing. Mounted patrolmen followed. The Music City Drum & Bugle Corps marched in crisp red and white uniforms, playing, appropriately, “Strike Up the Band.” Parade grand marshal Rodney Atkins waved from the bed of a red Chevy Silverado pickup truck. Nearly all the stars in the parade rode either in the beds of Silverados or in convertible Corvettes, since Chevy is the sponsor.

Gliding by were LoCash Cowboys (tossing spongy softballs to the fans), Trent Tomlinson, Due West (at their first CMA Fest), NASCAR star Jeff Burton and Shawn Patrick McGraw (who’s landed a spot on the Toby Keith tour). The Girl Scouts of Middle Tennessee walked and waved.

Storme introduced Deborah Allen as “the country-music Charro,” adding that, “she’s a one-woman party machine.” “You’re ageless,” he exclaimed to The Oak Ridge Boys. Oak Joe Bonsall was taking cell-phone movies of the crowd from their perch on the pickup. The Lost Trailers tossed chap sticks into the sea of waving hands. Ricochet, Lonestar, Mandy Barnett, Megan Munroe (who is writing a novel) and a t-shirt tossing Chris Young delighted the crowd.

Predators mascot Gnash and Titans mascot T-Rac hammed it up for onlookers. When clown Ronald McDonald appeared, Storme hilariously and unintentionally introduced him as “Richie McDonald.” The motorcycle-roaring Operation Troop Aid rolled by, trailed by an army Humvee, another non-Chevy entrant.

Meanwhile, in the Ernest Tubb Record Shop on Broadway, Stan Hitchcock was autographing copies of his new book, At the Corner of Music Row and Memory Lane. The longtime TV personality and former country record maker drew a nice crowd of snapshot takers and autograph seekers. The new Opry Originals gift shop was also packed.

After the parade came the kick-off concert at the Sommet Center stage. This, too, was carried by Sirius XM. Booked to star were Jason Michael Carroll, James Otto, Emerson Drive, LoCash Cowboys, The Lost Trailers, Rodney Atkins, Trent Tomlinson and Eric Church.

This was not the first Festival noise made by either Trent or Eric. During Lonestar’s fifth annual bowling tournament on Monday (6/8), Trent Tomlinson bowled a stunning 215. The event, which raises funds for St. Jude’s, also featured Buddy Jewell, Meagan Mullins, Bo Bice, Chris Young and more. Meanwhile, at the second annual Porter Wagoner fishing tournament held Tuesday (6/9), the Eric Church team came in first, landing a whopping 18.43 pounds of bass.

Eric’s current “Love Your Love the Most” single contains the line, “smallmouth bass have got me hooked.” “In just this one instance, I’ll allow for a lyric change, to ‘largemouth bass have got me hooked,’” says Eric. “Or maybe we could just say that, right now, I love the whole species.” Jeff Cook’s team came in second. Dean Brody’s team placed third. Veteran anglers Mel Tillis and Bobby Bare also competed. The event grew this year from 27 to 37 boats. The fish, by the way, are returned to Percy Priest Lake to swim away.

Winning fisherman Eric might set the CMA Music Festival performance record this year. In addition to the Sommet Center show on Wednesday, he’s playing at Riverfront on Friday afternoon and three late-night, sold-out shows at The Rutledge on Thursday, Friday and Saturday nights.

Also on Tuesday (6/9), a capacity crowd filled The Nashville Palace for the Loretta Johnson Memorial Concert. Dubbed “For the Love of IFCO,” the gig replaced the annual IFCO Fan Fair show to honor the late Loretta, who co-founded IFCO and died of bone marrow cancer on April 13. More than 20 acts were booked, and every single one of them and more showed up, on time, to perform. Bryan White, Linda Davis, Jimmie Van Zant, Steve Hall & Shotgun Red, Moore & Moore, new Hall of Famer Charlie McCoy, Billy Yates, Jack Greene and David Ball signed on, as did host Keith Bilbrey.