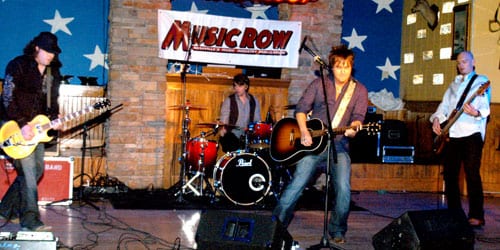 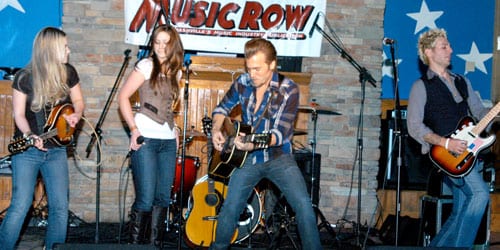 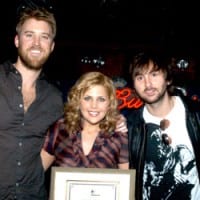 Our favorite reporting stations got an earful.

The 7th Annual MusicRow Country-Breakout™ Meet & Greet had the best music of any such event to date. After David Ross welcomed one and all, he introduced Rob Dalton of New Revolution Entertainment. Rob informed the throng that both CMT and GAC have added “Wild at Heart,” the debut video and single by Gloriana.
The band absolutely tore up the stage of Cadillac Ranch on Tuesday (3/3) with a harmony-soaked, vivid and energetic set, backed by their own mandolin, acoustic rhythm guitar and electric guitar playing. I have a feeling that this Emblem Records foursome earned itself some 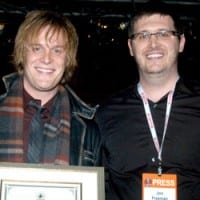 enthusiastic new fans. I, for one, was thrilled by their sound.

“We got a call about a buzz band down in Texas,” Mark recalled. “So I went down, and there were 2,500 college kids singing along with every word.” The group has been building a fan base for eight years. And that experience showed in a flawless, perfectly tuned set that featured the band’s hit single “When it Rains.”

The MusicRow reception was the kick-off event for the 40th annual Country Radio Seminar. As such, it attracted a fresh-eyed and eared crowd that wasn’t burned out after days of discussions and nights of partying. It also grows larger each year, hence the move to Cadillac Ranch. 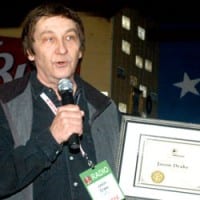 The magazine’s commitment to independent as well as major-label music means that all types of artists attended.

A sideboard held chicken fingers, barbecue sandwiches, hot wings and other snacks. But the bar was busier. 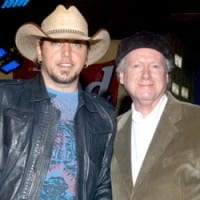 Rick Murray and Gene Kennedy. Entertainment reporter Brad Schmitt was covering the gig with a Channel 2 TV crew and was ga-ga over the two gals in Gloriana.

Among the label honorees were Keith Andrews (PLC Records), Mike Borchetta and Richard Franco (Lofton Creek), Dale Turner (Lyric Street, accepting for Rascal Flatts, who were performing at the Houston Rodeo) and Diane Richey (stepping up to the plate for an absent Capitol Records rep).

Back to the subject of our beloved reporting stations, Jon Freeman introduced us to Jason Drake, who won Reporter of the Year. “This guy 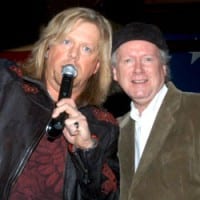 has never missed a reporting week, ever,” said Jon. “That’s almost unheard of.” Jason is at KAIR in Atchison, Kansas. “It’s an honor to report to MusicRow,” said Jason. Awwwww.

Michelle Ross handled the check-ins. Sarah Skates and Susana Ross were greeters. Christie King handed out the award plaques. Alan Mayor snapped the pics. Making his debut as a MusicRow staffer was Peter Cronin. He’ll be the new Sarah while she’s off on maternity leave starting next week.

“You only hired me because I’m guaranteed not to get pregnant,” he quipped.