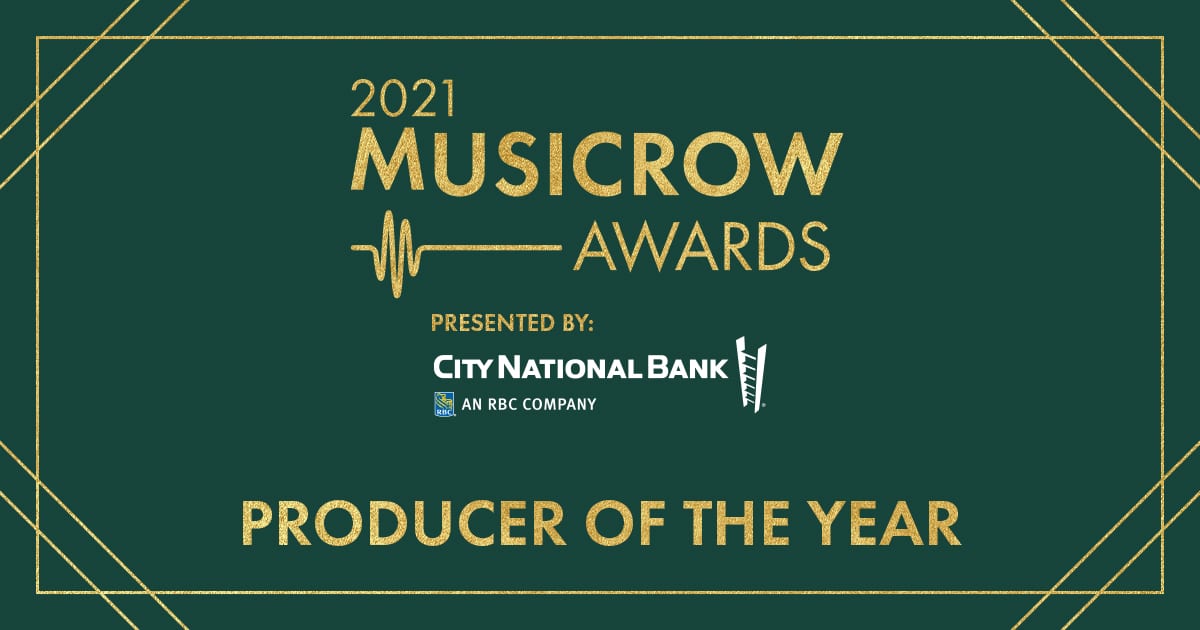 Following the announcement of this year’s nominees for the 33rd MusicRow Awards, we take a look at the MusicRow Producer of the Year category. This stellar class of nominees conjured up some of country music’s most innovative projects during the eligibility period of June 1, 2020 to May 31, 2021.

Winners are determined solely by MusicRow Magazine subscribed members. Voting is now open and closes on July 23 at 5:00 p.m. 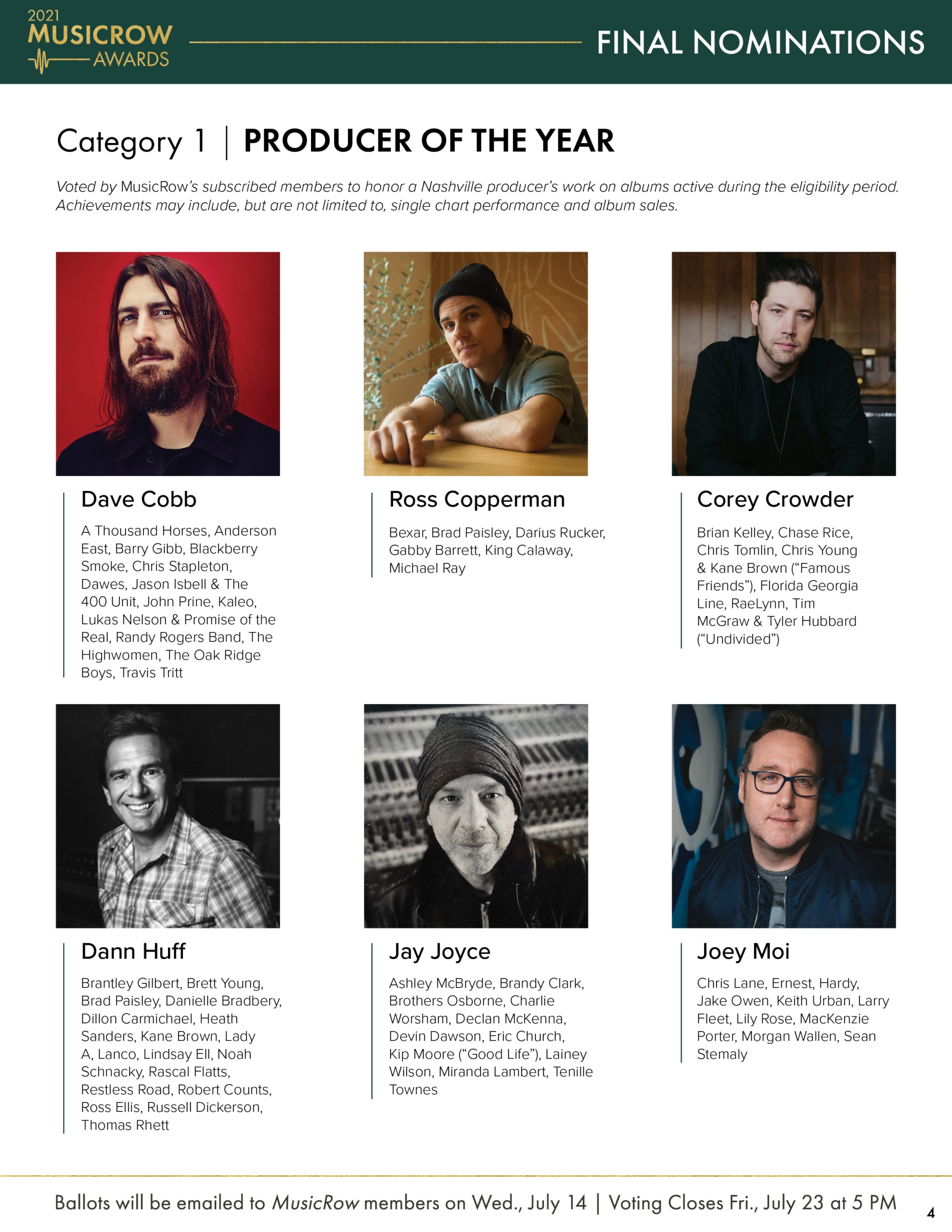 Dave Cobb lent his production talents to a wide swath of artists, ranging from the traditional country sounds of Chris Stapleton to rock band Kaleo to Americana heroes Jason Isbell & The 400 Unit. Among his recent hits are Stapleton’s “Starting Over” from the ACM Album of the Year by the same name. Cobb worked on the heralded album by The Highwomen, and with icons John Prine, Barry Gibb and The Oak Ridge Boys, as well as the talents of A Thousand Horses, Anderson East, Blackberry Smoke, Dawes, Lukas Nelson & Promise of the Real, Randy Rogers Band, and Travis Tritt. Cobb was nominated for Producer of the Year, Non-Classical at the 63rd Grammy Awards. He is a two-time MusicRow Producer of the Year.

Ross Copperman is co-producer of Gabby Barrett’s blockbuster debut album Goldmine, home to the hits “I Hope” and “The Good Ones.” Over the last year Copperman also had hits including Darius Rucker’s “Beers and Sunshine,” and worked with newcomers Bexar and King Calaway. He produced new music by Darius Rucker (“My Masterpiece”), Brad Paisley (“City of Music”) and Michael Ray (“Picture”). Copperman’s own recent EP, Somewhere There’s A Light On, is out now via Photo Finish Records. This is his fourth nomination for MusicRow Producer of the Year.

Corey Crowder enters the Producer of the Year category for the first time in 2021, thanks to numerous hits including Chris Young and Kane Brown’s “Famous Friends,” Tim McGraw and Tyler Hubbard’s “Undivided,” and Florida Georgia Line’s “Long Live.” His credits also include FGL’s 6-Pack EP, Chris Tomlin & Friends and Chase Rice’s “Drinkin’ Beer. Talkin’ God. Amen.” featuring FGL. Crowder re-upped with Tree Vibez Music in late 2020, where he produces artists including Brian Kelley and RaeLynn, and also released his own song as an artist.

Dann Huff is the producer and/or co-producer of Kane Brown’s “Worldwide Beautiful” and “Cool Again,” Russell Dickerson’s “Love You Like I Used To” and “Home Sweet,” and Brett Young’s “Lady.” He also worked with MusicRow Artist of the Year nominee Thomas Rhett on “What’s Your Country Song” and “Country Again,” and produced Lady A’s current single “Like A Lady,” and Rascal Flatts’ “How They Remember You.” Additional credits include Brantley Gilbert, Brad Paisley, Danielle Bradbery, Dillon Carmichael, Heath Sanders, Lanco, Lindsay Ell, Noah Schnacky, Restless Road, Robert Counts, and Ross Ellis. Huff has been voted MusicRow Producer of the Year for the last two years, and is an overall four-time winner.

Jay Joyce produced recent hits by Eric Church (“Stick That In Your Country Song,” “Hell Of A View”), and Brothers Osborne (“I’m Not For Everyone”), as well as Miranda Lambert’s Grammy-winning album Wildcard. In addition, “Hell Of A View” is nominated for MusicRow Awards Song of the Year, while Church and Lambert are nominated for MusicRow Awards Artist of the Year. Joyce also produced acclaimed artist Brandy Clark, and newcomer Lainey Wilson, who is in the running for Discovery Artist of the Year. He also has credits on fresh tracks from Charlie Worsham, Declan McKenna, Devin Dawson, Kip Moore and Tenille Townes. Joyce is a two-time MusicRow Producer of the Year.

Joey Moi produced one of 2021’s most-streamed albums, Dangerous: The Double Album by Morgan Wallen. Moi, a partner at Big Loud, also produced many of the company’s other artists including Chris Lane, Ernest, Hardy, Jake Owen, Larry Fleet, Lily Rose, MacKenzie Porter, and Sean Stemaly. This includes hits by Lane (“Big, Big Plans”), Owen (“Homemade,” “Made for You”) and Hardy (“One Beer,” “Give Heaven Some Hell”). Hardy’s “Give Heaven Some Hell” is nominated for MusicRow Song of the Year. This is Moi’s second nomination for Producer of the Year.