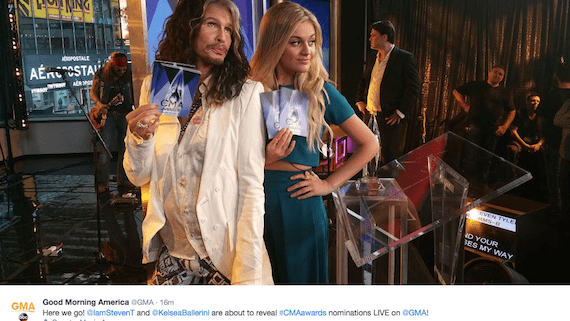 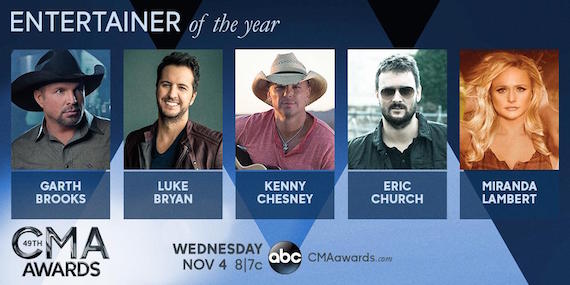 The final nominees for The 49th Annual CMA Awards were revealed this morning (Sept. 9) in New York City. Kelsea Ballerini and Steven Tyler announced the final nominees in five categories on Good Morning America. The announcement of the remaining seven categories followed on GoodMorningAmerica.com on Yahoo.

Eric Church and Little Big Town lead the nominations with five nods each. This is Church’s first nod for Entertainer of the Year. Kenny Chesney and Miranda Lambert each received nominations in four categories. Chesney could earn two additional trophies for co-producing “American Kids” (vying for Single) and The Big Revival (vying for Album).

For the first time in the history of the CMA Awards, four acts—Ballerini, Hunt, Maddie & Tae, and Stapleton—received debut nods for both New Artist, and, respectively, Female Vocalist; Single and Song; Vocal Duo; and Male Vocalist and Album. 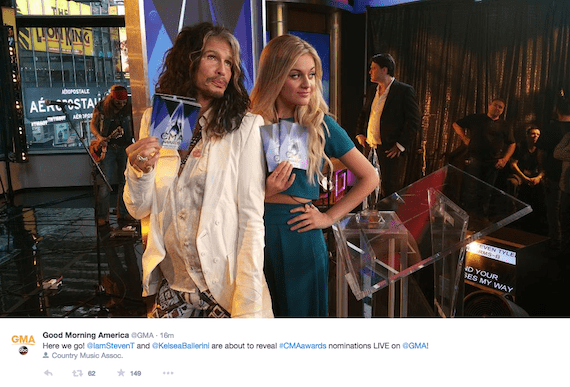 “I am very excited by this year’s list of nominees,” said Sarah Trahern, CMA Chief Executive Officer. “They represent the breadth and depth of the format—from first-time nominees to revered members of the Country Music Hall of Fame.”

Hosted for the eighth time by Brad Paisley and Carrie Underwood, The 49th Annual CMA Awards three hour broadcast airs live Wednesday, Nov. 4 (8:00-11:00 p.m. ET) from the Bridgestone Arena in Nashville on ABC. The final round of voting from eligible voting members of the CMA will run from Thursday, Oct. 8- Tuesday, Oct. 27 (6:00 PM/CT).

Album of Year
(Award goes to Artist and Producer(s))

Single of the Year
(Award goes to Artist and Producer(s))

Song of the Year
(Award goes to Songwriter(s))

“Like a Wrecking Ball”
Eric Church and Casey Beathard

“Something in the Water”
Carrie Underwood
Directed by Raj Kapoor 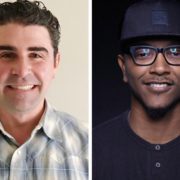 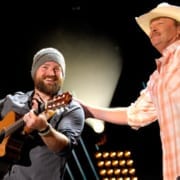