The American Society of Composers, Authors and Publishers (ASCAP) held its second annual “P.R.O.mote The Vote” industry showcase yesterday (Aug. 11), the same day CMA ballots were emailed to voting members. The invitation-only crowd gathered mid-day at The Rosewall in Nashville to enjoy a much-welcomed schmoozefest, complimentary cocktails and hors d’oeuvres, and artist performances.

Michael Martin, who heads the ASCAP Nashville membership office, says, “ASCAP created this event to remind people that every vote counts, and that just one vote can make the difference in these artists getting on the CMA Awards final ballot. We developed P.R.O.mote the Vote to raise as much awareness as possible on the day the CMA Awards second round ballot comes out.” ASCAP Creative Director Robert Filhart adds, “​We created P.R.O.mote the Vote in 2014 as a way to recognize our ASCAP artist members and all of their accomplishments of the past year​,​ and to support them in the upcoming CMA Awards​ voting season. ​Building on ​last year’s ​event, we once again partnered with​ ​Fifth Third Bank’s music group​ and Loe​b & Loeb ​for another hugely successful event that we plan to​ continue for years to come.” Valory Music Co.’s RaeLynn opened the performances with a new song, “The Zoo” followed by her hit, “God Made Girls,” but not before expressing how thankful she was to everyone in the room for the song’s success. I.R.S. Records’ recording artist Striking Matches (Justin Davis and Sarah Zimmermann) hit the stage next with two songs from their project, Nothing But The Silence, produced by T Bone Burnett. After performing “Trouble Is As Trouble Does” and “Make A Liar Out Of Me,” there was no doubt Zimmermann had left the audience mesmerized with her signature guitar shredding.

Black River’s Kelsea Ballerini was up next and performed the Eddy Arnold classic, “Make The World Go Away.” Having celebrated her first No. 1 song the previous day for “Love Me Like You Mean It,” Ballerini sang her chart topper while everyone grooved along.

Canaan Smith then took the stage with “American Muscle” and “One of Those” from his recently released album, Bronco. He excitedly shared news that he was upgrading to his first touring bus right after the party was over.

“This is the stuff legends are made of,” proclaimed Titta as he introduced Lee Ann Womack who rounded out the “P.R.O.mote The Vote” bash with “Chances Are” followed by the title track to her latest album, “The Way I’m Livin’.”

Now it was time to go vote. CMA ballots for the second round have been sent out and voting closes Thursday, Aug. 20 at 6:00 p.m. CST. 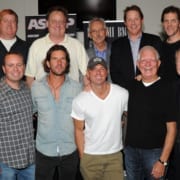 George Jones Funeral Service To Be Open To Public