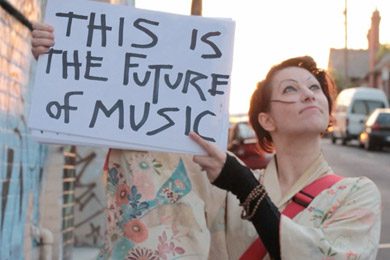 Three months ago Kickstarter celebrated its third anniversary collecting funds for creative projects. With the system, the general public is able to kick start projects with financial support to receive rewards.

Kickstarter began publicly releasing its statistics June 21, 2012. Since the company’s launch in April 2009, $302 million has been pledged towards projects classified in 13 categories including music, film/video, publishing, art, theater, and photography.

Fifty-four percent of Music campaigns have reached their goals, Country being the most successful genre at 62%. The catch, however, is that donations are paid on an all-or-nothing basis. Meaning, if the forecasted financial goal is not met, all pledges will be void and the project remains unfunded. 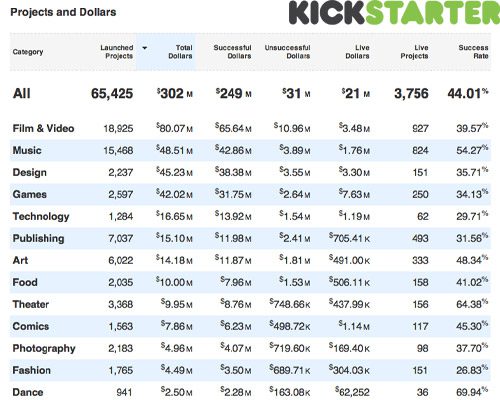 In May, musician Amanda Palmer set out to raise $100,000 with her campaign. Thirty days later, the musician became an anomaly, breaking the $1 million mark with the support of almost 25,000 backers. Palmer’s $1.2 million marks Kickstarter’s seventh most profitable campaign—the highest being for a watch that syncs with smartphones that reached $10.3 million.

It is worth mentioning that Palmer did not get her start with this Kickstarter project. She had an established following from a Roadrunner Records deal as part of The Dresden Dolls. When the duo separated from the label in 2010, Palmer maintained constant communication with fans online.

For creators, clearly defined goals with fun and creative incentives are key. Palmer’s fans received a digital album for donations of just $1; a PDF for $5; $25 and $50 for digital plus CD or vinyl, respectively; and a limited-edition art book plus the above for $125. Kickstarter outlined a breakdown of the rewards with the corresponding graph. 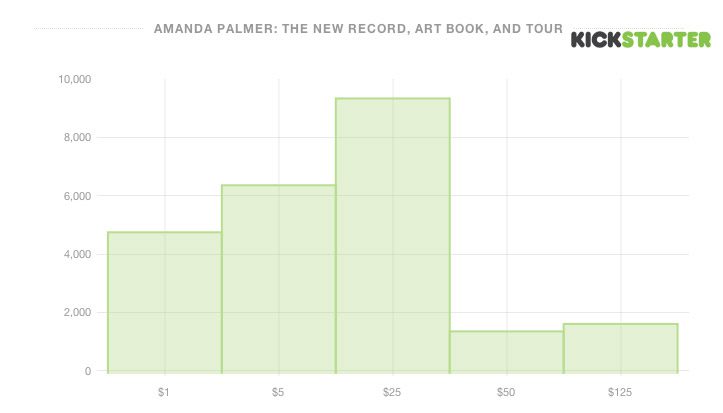 In a May 22 blog post, Palmer debunks a frequent question of: “Are you loaded?” with a detailed analysis of the cost layout for overhead, rewards, and touring, noting she will personally take home about $100,000:

It COSTS REAL MONEY to manufacture and distribute a record, to have a staff and a publicist, to promote an artist and tour a band. That will never truly change.  But now, because we can reach out fans directly without the machine, artists are empowered to call the shots and keep whatever’s leftover…not the labels. Of course, I could send cheap-ass jewel case CDs, fire my staff, make a cheap book on xerox paper, and tour just with a solo piano…with no crew, no band….and RAKE IN THE DOUGH. I could potentially do that and walk with close to half a million dollars. but the products would suck and nobody would ever trust me again.

There are no fees to begin a campaign, but successful projects are subject to a 5% Kickstarter fee and anywhere from 5-10% processing fee from Amazon. The company is based out of New York, currently supporting a staff of 39. 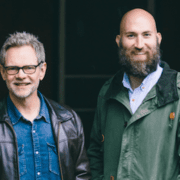