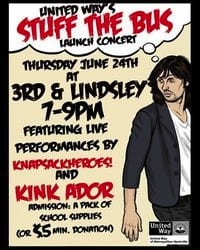 United Way is hosting the “Live United” Summer Song Contest. The organization is looking for songs about hope, teamwork, restoration and overcoming adversity, such as songs inspired by Nashville’s recent flood.

Two finalists will perform their songs live at 3rd and Lindsley during United Way’s “Stuff the Bus” School Supply Drive Launch Concert on June 24, featuring Kink Ador and Knapsackheroes. The winner will be announced at the event. The winner’s song may used in an upcoming video, which will be featured on UnitedWayNashville.org and emailed to thousands of partners across the city.

Songs will be accepted until 5:00 pm on June 18. Details on the contest here.