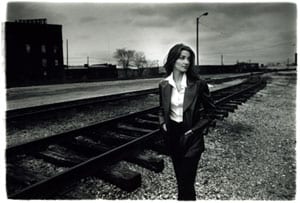 Hit songwriter Matraca Berg will take a seat at the Country Music Hall of Fame® and Museum on Saturday, July 18, as the latest subject of the quarterly programming series Poets and Prophets: Legendary Country Songwriters. The 1:30 p.m. program, which will be held in the Museum’s Ford Theater, is included with Museum admission and free to Museum members.

Museum Editor Michael Gray will conduct an in-depth, one-on-one interview with Berg, illustrated with audiovisual elements from the Museum’s collection, including recordings, photos and film clips. Berg will perform briefly during the program, and immediately following she will sign autographs in the Museum Store (visit the Museum’s Web site for signing details).

Matraca Berg’s stirring, powerful songs have helped her remain one of Music City’s most successful songwriters for more than two decades. Berg’s Billboard #1 hits include “Wild Angels” (Martina McBride), “You Can Feel Bad” (Patty Loveless), “XXX’s and OOO’s (An American Girl)” (Trisha Yearwood), “The Last One to Know” (Reba McEntire) and “Strawberry Wine” (Deana Carter), among others. Other artists who have cut her songs include the Dixie Chicks, Sara Evans, Faith Hill, Ray Price, Linda Ronstadt, Randy Travis, Tanya Tucker, Keith Urban and Gretchen Wilson.  As a recording artist, Berg charted a handful of singles herself in the 1990s.

Jude Johnstone, Danny Flowers and James House will perform at 8 p.m. Saturday, July 18, in the third concert of the 2009 Bluebird on the Mountain series. Held on the scenic grounds of Vanderbilt’s Dyer Observatory, Bluebird on the Mountain showcases artists from the Bluebird Cafe. Season tickets are sold out for this year’s series, but advance tickets for the remaining single shows are available through Ticketmaster, which will add a handling fee. Tickets are $95 for a carload.

The series was created in collaboration with Amy Kurland, who founded the Bluebird Cafe in 1982 and built the club into one of Nashville’s premier performance venues for songwriters before selling it to the Nashville Songwriters Association International in late 2007.