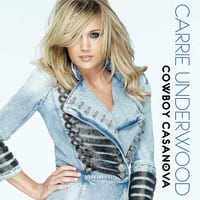 The lead single from Carrie Underwood’s third album, Play On, is out now and fans can hear it at her official Web site and on YouTube. The rock influenced song “Cowboy Casanova” offers a cautionary word about a sneaky man. Underwood wrote the track with Mike Elizondo and Brett James, one of the writers behind her GRAMMY-winning “Jesus, Take the Wheel.”
Originally slated to arrive at country radio on Sept. 8, the leak of a rough, unfinished version of “Cowboy Casanova” prompted a rushed-to-radio delivery of the real single late Wednesday evening.

A four-time GRAMMY Award winner, ACM Entertainer of the Year, and reigning, three-time CMA and ACM Female Vocalist winner, Carrie is continuing work on Play On, which releases on November 3. She is again teamed with Mark Bright, who produced her Carnival Ride collection as well as seven tracks from Some Hearts.

Since the release of her debut album, Some Hearts, in 2005, Underwood has amassed sales of more than 10 million with her first two albums.