Love And Theft’s Brian Bandas, Eric Gunderson and Stephen Barker Liles are active Twitter users and recently drew on the social networking site to connect with their fans on the release of their debut album, World Wide Open.

Last Tuesday, Love And Theft, or @LNTweet as they are known to their Twitter followers, Tweeted that they would be stopping at a Nashville area Best Buy store to purchase the first copy of their CD. They were happily greeted by a large gathering of fans who showed up at the store to pick up the record and get it signed by the band. 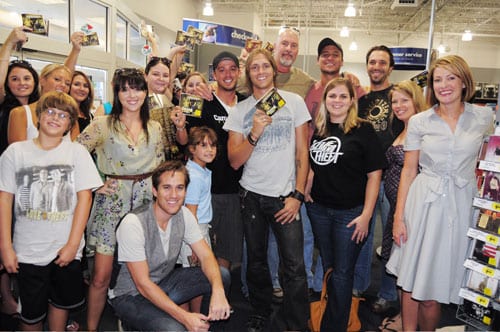 You can see all the latest Tweets from your favorite artists like Love And Theft on MusicRow’s Artist Twitter Talk page here.

Theories abound about Apple’s big announcements coming Wednesday, Sept. 9 in San Francisco. The iPod will be the focus, but details aren’t confirmed. It is likely a new version of the iPod will be introduced, including a camera, as well as the next-generation iPhones, which will include video recording capabilities. Many experts also say the iPhone may soon be available through carriers other than AT&T.

Other rumors on AppleInsider.com suggest the introduction of iTunes 9, which might have social networking features and support the Blu-ray format.

The Web site reports, “The Sept. 9 date has also fueled rumors that The Beatles’ discography could finally make its long-awaited appearance on iTunes. That Wednesday is the same day the band is re-releasing its entire catalog, as well as the game The Beatles: Rock Band.”

Harmonix Music Systems and MTV Games are launching “Rock Band Bar Nights,” which will provide tools for U.S. bar owners to host their own Rock Band Nights. It’s like karaoke on steroids.