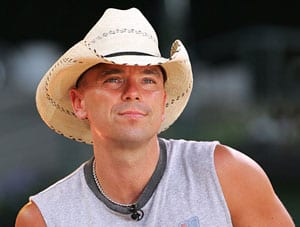 It’s widely known that Kenny Chesney is a huge football fan, and now he has put pen to paper and written a song about the game that will be used exclusively by ESPN this fall.

“It was one of those moments of spontaneous inspiration,” he recalls. “We were talking about how much goes into getting on that field, what it means to those guys out there… and Bill Bonnell turns to me and says, ‘You oughta write a song about it… ‘I mean, there we were at Ruth’s Chris Steakhouse with [announcer] Brett Musburger, [sports analyst] Kirk Herbstreit and the head producer of ESPN Saturday Night Football on ABC [Bonnell]—and the next morning I’m gonna do College Game Day—and it just hit me! I asked for a cocktail napkin, and started writing the verses and the chorus.”

“This Is Our Moment” debuts across the ESPN properties, including their ABC network live college telecasts as part of Football Kickoff Weekend on Sept. 3.

Chesney is also set for PBS’s legendary concert show Austin City Limits, debuting Oct. 17. The special will feature stripped down performances of some of his biggest hits such as “Beer In Mexico,” “Summertime” and “Young.” Chesney also reaches into his more contemplative songs with “Anything But Mine” and the never before performed “Somewhere In The Sun.” Joining him are percussionist Drummie Zeb from the Wailers, and singer/songwriter Mac McAnally, who appears on the duet “Down The Road.”