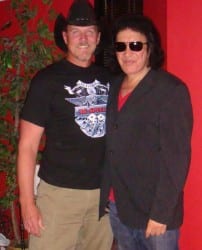 Trace Adkins will appear on this week’s episode of A&E’s reality show, Gene Simmons Family Jewels, set to air Aug. 9 at 8:30 CT. In the episode, titled “Rootin’ Tootin’ Gene,” Simmons travels to Nashville as a favor to KISS’ manager and takes a country band under his wing. Adkins stops by the studio to surprise his former Celebrity Apprentice co-star and friend. Also in the episode, Simmons visits the Loveless Cafe along with Jypsi and Drew Davis Band.

The Bacon Brothers will make their Opry debut Tues., Sept. 1 when they appear alongside the Bellamy Brothers to perform the Bellamy’s current single, “Guilty of the Crime,” on which both sets of brothers appear. This marks the first public appearance for the Bacons and the Bellamys together. The song is the first single from The Bellamy Brothers’ newest album The Anthology, Vol. 1 available digitally now and in stores Sept. 29.

Darryl Worley will perform at the Wilson County Fair in Lebanon, TN on Mon., Aug. 24 at 7 PM. For more information, visit www.wilsoncountyfair.net.