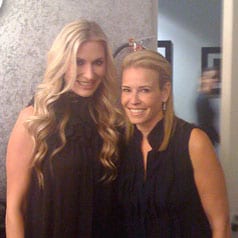 Toby Keith‘s sixth annual golf and music fundraising weekend to benefit Ally’s House raised more than a half-million dollars to help children with cancer and their families in Keith’s native Oklahoma. The $550,000 raised brings the to-date total to nearly $3 million. The dinner, music and auction saw several big ticket items drawing huge bids. A dinner party for 20 with Keith earned $32,500. The Alaskan Adventure with Deadliest Catch boat captain Sig Hansen brought in $13,000, and a Costa Rica getaway to the Four Seasons drew a $19,000 bid. More than 40 sports and music celebrities were in attendance, including Keith’s Beer For My Horses co-star and co-writer Rodney Carrington, and baseball player Roger Clemens.
———————————–
Luke Bryan hosted Yahoo! Music’s first Country Music Wednesdays on Twitter last night. Fans were able to watch the conversation by adding twitter.com/lukebryanonline and twitter.com/yahoo_music to their “follow” list. Bryan also debuted the video for his current single “Do I” on Amazon this week, where fans can watch the video, buy the single, and pre-order his Capitol Nashville album Doin’ My Thing, which will be released Oct. 6. Bryan is on the road all summer on his Miller Lite sponsored tour.
———————————–
Aaron Tippin has launched a line of nutritional supplements called Aaron Tippin Nutrition (ATN). In his mid 20s the singer was a competitive bodybuilder and he’s been a fitness buff ever since, which led to him starting what he describes as this new “way-of-life” program.