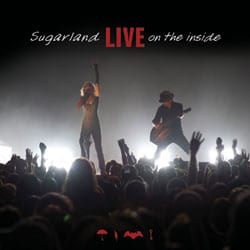 Sugarland is getting its first network television special. Sugarland: Live on the Inside will air on ABC, Mon., Aug. 3 at 7 PM/CT, the night before the duo’s new Wal-Mart exclusive CD/DVD pack of the same name hits shelves.

Producer/director Shaun Silva taped the one-hour special at Rupp Arena in Lexington, Kentucky using 20 cameras. It features the reigning CMA Vocal Duo of the Year performing their  biggest hits such as “Settlin,’” “Stay,” “All I Want To Do” and “Something More.”

Sugarland: Live on the Inside is executive-produced by band members Jennifer Nettles and Kristian Bush, with UMGN Sr. VP Jason Owen. The special is a Tacklebox Films production.

The Grammy winning duo exploded onto the music scene in 2004 and are nearing the 7 million albums sold mark. They are headlining a U.S. tour that runs through the fall.

“Television music specials and performances become iconic. Who hasn’t seen replays of the Beatles on Ed Sullivan or Elvis’s TV special wearing his jump suit and giving away his scarf?” says Nettles. “Even performances that I can remember as a child, like ‘Live Aid’ for example, really made such an impact. We are so excited to have our show on ABC and hope that it will be a moment that people will enjoy and remember.”

“We have overheard fans for years say, ‘I brought my friend to see the show, this is their first Sugarland experience’ with so much pride and excitement on their faces. It’s as if they can’t wait to share what they have discovered,” Bush adds. “This special is their new ticket that they can give to a friend. That is the most exciting part of this, imagining how far it will reach.”