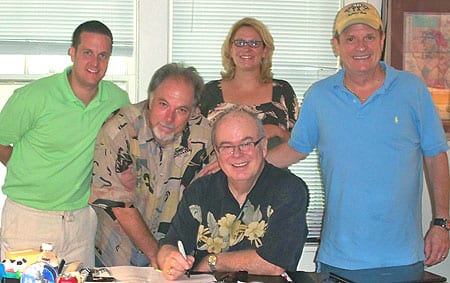 Don Cook, writer and producer of numerous hits by Brooks & Dunn, has signed with Skyline Music Publishing. Among his credits are the B&D songs “Only In America,” “It’s Getting Better All The Time,” “Brand New Man,” “My Next Broken Heart,” “That Ain’t No Way To Go,” “You’re Gonna Miss Me When I’m Gone” and “She Used To Be Mine.” Since 1991 he has co-produced thirteen No. 1 hits by Brooks & Dunn, and served as producer on successful albums for The Mavericks, Olivia Newton-John, Shenandoah, Lonestar, Tracy Lawrence, Joe Diffie, and more.

He also wrote “Even The Man In The Moon Is Crying” and “Born To Love You” by Mark Collie, “What I Meant To Say” and “On A Good Night” by Wade Hayes, “Now I Know” by Lari White and “Small Town Girl” by Steve Wariner. In addition, Cook has had cuts by Conway Twitty, George Strait, Keith Whitley, Vince Gill, Alabama, Waylon Jennings and a host of others.

In 1994, Cook was named Senior Vice President at Sony/ATV Tree, and four years later was upped to Chief Creative Officer. He retired from the business side of publishing in 2004 to focus on his family and songwriting.