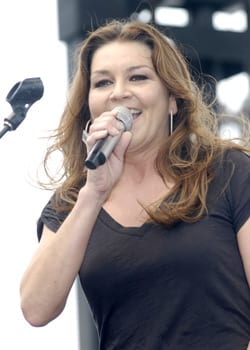 Both the start and the finish of Thursday’s CMA Music Festival concerts were marred by weather, but in between it was a blast.

Thunder rumbled, and an ominous black cloud descended on Music City as things were about to get underway at Riverfront Park. About 10 minutes before the 10:00 AM show time, the crowd was instructed to disperse, and everybody scattered to places unknown. Sure enough, lightning flashed, and a scary downpour ensued. But 10 minutes later, the fans were back and ready to rock to Gretchen Wilson.

As a result, that stage ran approximately 30 minutes behind schedule for the rest of the day. The Hard Rock, Sommet Center, Metro Courthouse, Acoustic Corner and Family Zone stages were all unaffected because they cranked up at 11:00 AM or later.

By the time I arrived downtown a little after noon, kids in the Family Zone were making a racket in the Musical Petting Zoo, Ronald McDonald was doing magic tricks in the tent, the balloon maker was hard at work and toddlers were bouncing on the inflatables. 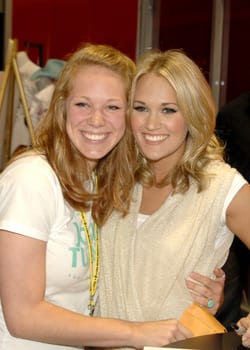 At the Sommet Center, Steve Holy was rocking on “I’ve Got a Brand New Girlfriend,” and the Chevrolet folks were handing out blue t-shirts. Up the hill on the steps of the Ryman Auditorium, Cindy Moore was greeting fans in her Minnie Pearl outfit. This is her 30th anniversary portraying the late Opry legend. She began playing Minnie at Opryland in 1979 and was tutored in her role by Minnie, herself. Cindy joined Dave & Sugar and toured as a pop/rock vocalist before returning to Opryland and her Minnie role in the mid-1980s.

Inside the Convention Center, TelluRide was singing “Pencil Marks” to a packed audience at the Acoustic Corner, sponsored by Durango Boots. The band has just returned from shooting its video in L.A. with director Rick Schroeder, whose last country effort was the acclaimed “Whiskey Lullaby.” Bluesy Razzy Bailey was next up on that stage, shepherded by the CMA’s Brandi Simms and Aaron Hartley.

Downstairs in the Fan Fair hall, the autographing was well underway in the booths. Tanya Tucker, The Bellamy Brothers, Michael Peterson, Aaron Tippin, Chris Young, Doug Stone, Bucky Covington, Jimmy Wayne, The Whites, Craig Morgan, Jason Aldean and Trent Tomlinson were doing their duty. The new Native American band Brule was in the RFD-TV booth, since it has a program on that network. Another unusual autographing participant was the CCM group Point of Grace. Petite Carrie Underwood was being mobbed, needless to say. Preshus Tomes introduced me to former Music Row DisCovery Award winner Matt Gary. So that was fun. Reba McEntire arrived at 3:00 in the afternoon, which resulted in much hoopla. 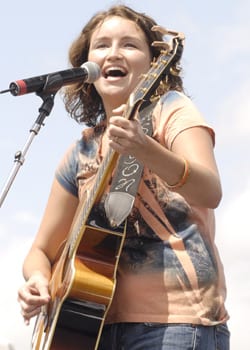 Back down the hill at the Sommet Center stage, Caitlin & Will were powerfully singing their darkly atmospheric anti-alcohol song “I Am Not Your Friend.” In the Fun Zone on Lower Broadway, there was an Interactive Archery Experience, karaoke contests and a real Army tank to climb on and take snapshots with. Sean Patrick McGraw was rocking splendidly on the Hard Rock stage, although the vocal mix wasn’t the greatest.

While she was waiting to go on, I asked Ashton Shepherd how her autographing had gone that morning. She replied that she signed 200 in an hour. “They like me because they think I’m Real, I think,” she said. “And they come in all shapes and sizes.” She is, indeed, Real, plus delightfully country and a living doll. I am happy to report that her Riverfront performance was brilliant and received with enormous enthusiasm.

At Fort Nashboro, there is a Field & Stream Celebrity Outdoorsmen Challenge, which you can watch on bleachers under a cool, shady tent. When I was there, Julie Ingram was gamely shooting arrows at deer, boar and bear shaped targets. 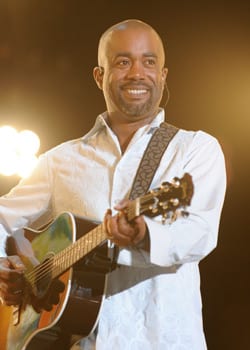 Alas, the new stage at the Metro Courthouse seemed kinda sad when I arrived there around 2:30 PM. There were fewer than 50 people in that entire park to watch Lucas Hoge and his band, who sounded great nonetheless. This is a shame, because up there on the hill you get the best breezes. The flawless lawn is perfect for sun bathing, and if you get too hot all you have to do is take a few steps into the nearby splashing fountains, which several kiddies were doing.

Meanwhile, up on Music Row, folks parked blocks away and hiked to the ever-popular SunTrust Hot Dog Day. That evening at The Tin Roof, The Parks showcased for Carrolwood Records. The act is country music’s only father-son duo. When the music was supposed to start, they were still doing soundcheck. When it finally did, poor sound stopped the show anyway. Tom Roland, John Dorris, Rob Simbeck, the group Love & Theft, Diane Richey, Vanessa Parker and Shelia Shipley-Biddy were in the house.

That night at LP Field, fireworks exploded and jets flew over to christen the nightly CMA Fest concerts. Brooks & Dunn kicked things off. Reba appeared when they sang “Cowgirls Don’t Cry.” The crowd roared when her image appeared on the jumbo video screens and cheered again every time she sang a line.

Reba took the stage next, and this is where the wheels came off. After two songs by her, host Stormie Warren told the stadium crowd they’d have to leave because a storm was approaching. The exodus of thousands of people and vehicles was amazingly orderly. As we approached our car, lightning was dancing across the sky. The storm blew in less than an hour later.

The few who remained were instructed to fill the front rows at 12:30 AM. We do, after all, have a TV special to film. I am told that Darius Rucker, Rascal Flatts and others performed until after 2:30 AM. I hit the hay.