Soundstripe, a leading provider of royalty-free music, stock video, and sound effects for use in videos, podcasts, and other media projects, has announced that it reached several significant business milestones in 2020.

The company reports paying out over $2.5 million to music creators last year, including 75 unique artists from whom the service sourced content. While a majority of the music is created in Nashville, Soundstripe taps artists from all over the world, spanning 18 different countries.

“2020 was a challenging year for the entertainment business, so we are happy to have done our part to ‘Keep Creatives Creating’ by getting them paid for their work, giving them options to diversify their income, and launching new products that give our subscribers everything they need to make compelling videos, podcasts, Twitch streams, and other great content,” said Travis Terrell, Co-Founder and Co-CEO of Soundstripe.

Soundstripe music is created on a work-for-hire basis, but songwriters also receive 100 percent of the writer’s share of performance royalties when their songs are used, according to the company. “It’s called ‘the writers share’ for a reason,” said Micah Sannan, Co-Founder and Co-CEO. This allows musicians to collect recurring revenue from their works when used by Soundstripe customers, in addition to an upfront payment.

Soundstripe also expanded its offerings by adding stock video to its library, with over 70,000 clips currently available.

In 2020, Soundstripe was named to the prestigious Inc. 5000 list, where its growth rate of nearly 5,000 percent over the last three years placed it at No. 68 among the fastest growing private companies in the U.S., as well as No. 5 in the Media category and No. 1 in its home state of Tennessee.

In addition, the company was named to The Tennessean’s Top Workplaces list for the second year in a row, and Co-Founder and CTO Trevor Hinesley was named to the Nashville Business Journal’s 40 Under 40 list. 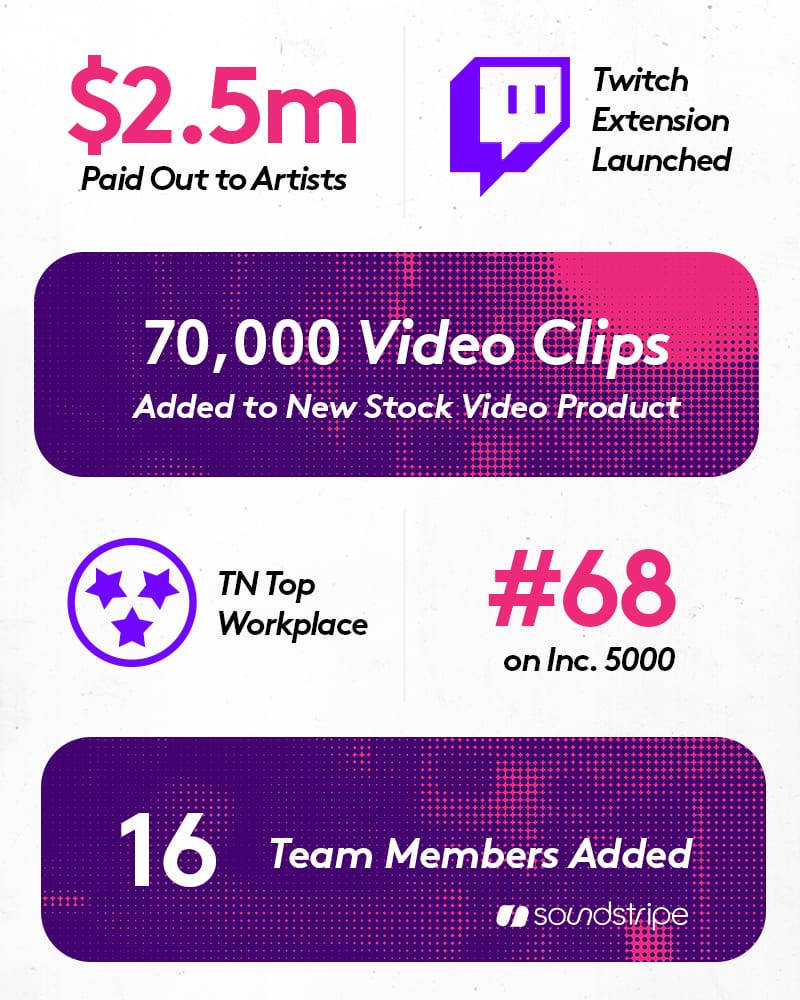