Songwriters Blair Daly, Kip Moore and Troy Verges should soon have plenty of “Beer Money” burning holes in their pockets following the recent No. 1. Moore offered to pick up the tab when he sang, “Come on, come on, baby I’m buying.” But BMI and sponsor Avenue Bank let him off the hook today (Feb. 14) by hosting a lunchtime soiree at BMI to toast his second consecutive charttopper as an artist and writer. BMI’s Perry Howard led the proceedings.
Publishers taking the stage to offer and share in the congratulations were UMPG’s Kent Earls, Warner/Chappell’s Ben Vaughn, Combustion’s Chris Farren and Cornman Music’s Nate Lowery. Earls recalled how writers Verges and Daly met 20 years earlier as students at MTSU. After all their time collaborating, “Beer Money” is their first single as co-writers, penned with Moore the day before he went into the studio to record his debut album.
Verges and Daly thanked everyone involved with the song’s success. Daly joked that they waited so long to have a No. 1 because they both hate speaking in public, but assured, “let’s not make it another 20 years.”
UMG promo guru Royce Risser cheered his team members for their strong one-week push to get the track into the top spot. He also explained how Moore pens lengthy hand-written notes to radio programmers and proclaimed, “Kip, you out-work our staff.”
CMA’s Brandi Simms, CRB’s RJ Curtis, and Avenue Bank’s Cooper Samuels also presented honors.
Long known as a hit songwriter, Brett James is Moore’s biggest champion. They first met at the YMCA, where Moore was working and James was working out. James signed him to a publishing deal with Cornman Music, and produced his album. “This is family for me,” said James of the songwriters. “There’s nothing like celebrating a No. 1 with three of your best friends in the world.”
Moore recalled rough patches earlier in his career, when he lived in run-down apartment and songwriting filled his days off work. “My soul would’ve been dead if it wasn’t for music,” he explained honestly. He offered a long list of thank-yous, starting with James. “Brett James is what this town should still be about…He believed in me. It is that belief that I will never forget.” He also saluted Red Light Management’s Shawn McSpadden, and drew cheers from the audience with his toast to Marc Dennis and his team at CAA: “They wanted me when no one else did—now they look like geniuses.” 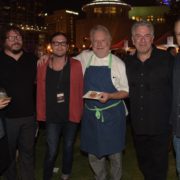