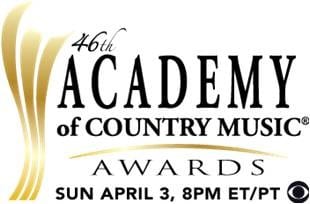 Fan voting for the ACM Entertainer of the Year and New Artist of the Year Awards will be powered by the RAM Truck Brand for the second year in a row. The truck maker will also roll out the red carpet at the ACM Awards as the title sponsor.
Fans can vote for the awards on www.VoteACM.com, and the winners will be announced live on the 46th Annual Academy of Country Music Awards. The show will be broadcast from the MGM Grand in Las Vegas, Sunday, April 3 on CBS.
In the running for Entertainer of the Year are Jason Aldean, Toby Keith, Miranda Lambert, Brad Paisley, Taylor Swift and Keith Urban. Competing for the New Artist award are The Band Perry and Eric Church.
New Artist voting will close at 5 p.m. PT on April 3 (before the live show starts) and Entertainer of the Year voting will close during the third hour of the live broadcast.
• • •
The Academy of Country Music is hosting two days of all-star concerts at the Fremont Street Experience in Las Vegas during The Week Vegas Goes Country™! ACM Weekend on Fremont Street Experience will feature newcomer category nominees, special guests and headliners Ronnie Dunn and Sara Evans performing on two different stages to crowds downtown.
The weekend-long party leading up to the 46th Annual Academy of Country Music Awards will be hosted by three-time ACM On-Air Personality of the Year Award winner Blair Garner, and will feature Sarah Darling, Casey James, Brett Eldredge, Chris Young, Lee Brice and Sara Evans on April 1; and Thompson Square, the JaneDear Girls, Steel Magnolia, Randy Houser, Easton Corbin and Ronnie Dunn on April 2.