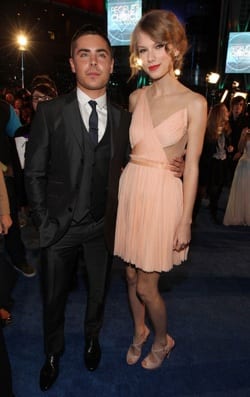 Taylor and actor Zac Efron on the red carpet at the People's Choice Awards.

Taylor Swift won the trophy for Favorite Country Artist at last night’s (1/5) People’s Choice Awards. She was given the fan-voted honor by the legendary Elton John, who spoke about his love of the genre during the presentation.
After the show at the Los Angeles Nokia Theater, Swift hit the CoverGirl 50th Anniversary Celebration at Boa Steakhouse in West Hollywood, Calif. The 21-year-old is the face of the beauty brand’s NatureLuxe line.