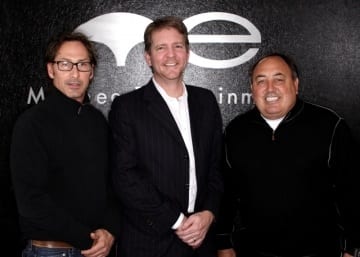 Manager Greg Hill has joined McGhee Entertainment, bringing with him current clients Rodney Atkins, Adam Brand and Heidi Newfield.
Chairman of McGhee Entertainment, Doc McGhee, and President Scott McGhee announced today (1/10) that Hill will enter as President of McGhee’s Nashville office. He will report directly to the McGhees, whose current roster already includes Nashville singers Chris Cagle, Darius Rucker, Drew Davis, Jeremy Lister, Jypsi, and Cheyenne Kimball. This story was first tipped in MusicRow’s Crystal Ball on Friday (1/7).
Hill founded Greg Hill Management, Inc. in 2001, and most recently served as General Manager/Partner of Greg Hill Management/Red Light Management.
Doc McGhee had this to share, “We opened the Nashville branch of McGhee in order to expand our presence within the Nashville music community, and in just under five years since our establishment in Music City, we have watched the fabric of our industry change to encompass much more under the management umbrella. With that shift, we are excited to expand and bring in someone with Greg’s vast experience to oversee operations within our newly structured Entertainment Co.”
Scott McGhee adds, “With ever-changing responsibilities of a management company, Greg is a great fit with McGhee Entertainment due to his forward-thinking and practical approach to artist management.”
“McGhee entertainment has been the consistent leader in management longer than anyone else.  The quality of the people, the history, and the focus on being the best made me want to join this team above all others,” says Hill. “I’m looking forward to starting the next chapter of my career with this team of hard-working, creative individuals.”
McGhee Entertainment was formed in 1983 in New York City. In addition to the aforementioned artists, the current roster includes KISS, Guns N’ Roses, Ted Nugent, Night Ranger, Jack Blades, Hootie & The Blowfish, Sacha Edwards, Down, Paul Stanley, and The Willis Clan.
Hill may be reached at McGhee’s Nashville offices at 21 Music Sq. W., (615) 327-3255 or [email protected].