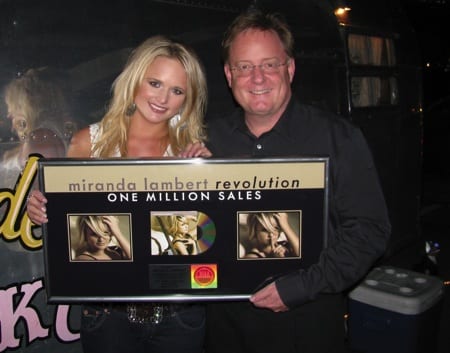 Overton presents Lambert a plaque for her platinum album, Revolution.

Hot country couple Blake Shelton and Miranda Lambert are having an exciting week.

Lambert just celebrated the Platinum certification of her album Revolution with Sony Music Nashville Chairman and CEO Gary Overton. The album has yielded the No. 1 singles, “White Liar” and “The House That Built Me,” and was voted the ACM Album of the Year. With nine nominations, she is the leading nominee going into the CMA Awards. 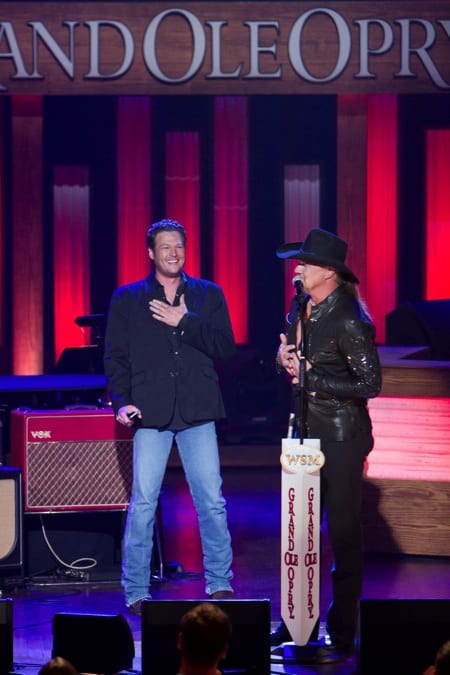 Trace Adkins surprised Blake Shelton when he asked him to be the Opry's newest member.

Shelton is being inducting into the Grand Ole Opry on Saturday night (10/23) and is celebrating all week long. The notorious Twitter hound will host a Twitterview with fans tomorrow (10/21) at 11 a.m. Central at Twitter.com/opry. Fans can submit questions for Shelton to @opry via Twitter.com. Shelton’s Opry week also includes his “Blakeover” of the Opry’s YouTube channel and giveaways at opry.com. Last night he visited late night talk show Chelsea Lately for the show’s 600th episode. He is up for four awards at the CMAs.