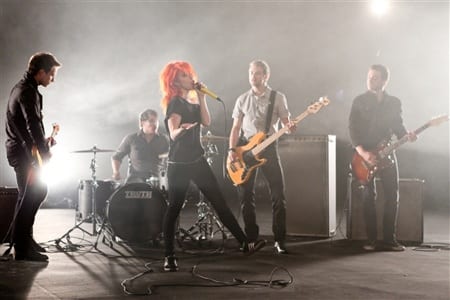 Paramore on the set of their nominated video "Ignorance."

Williams’ song “Airplanes” with rapper B.o.B. picked up three nominations and she also received a nod with longtime band Paramore for their video “Ignorance,” which is up for Best Rock Video.

Hip-hop popster Kesha raked in three noms for her debut hit “Tik Tok” and another one for her collaboration with 3OH!3, “My First Kiss.”

Lady Gaga set a record for the most nominations in a single year, bringing in 13 nods, far and away ahead of the second most nominated star Eminem, who will vie for eight trophies.

Fans can go to VMA.MTV.com (or text VMA to 97979 if they are Verizon subscribers) to vote through Sept. 12.