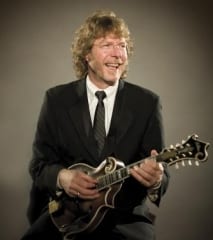 Renowned musician Sam Bush will deliver the keynote address at the International Bluegrass Music Association Business Conference on Monday, September 27, 2010. The acclaimed mandolin player and seminal newgrass star is expected to focus his speech on the 100th anniversary of the birth of Father of Bluegrass Bill Monroe, coming up on Sept. 13, 2011. Bush will talk about what that milestone means to the bluegrass music community and industry, and how to celebrate a century of Monroe’s influence.

Bush has been honored with the Americana Music Association’s Lifetime Achievement Award. He’s the co-founder of the genre-bending New Grass Revival and an in-demand musician who has played with everyone from Emmylou Harris and Bela Fleck, to Lyle Lovett and Garth Brooks. His latest solo album, Circles Around Me, (Sugar Hill) is an inspiring mix of bluegrass favorites and new songs.

The IBMA Business Conference is part of the organization’s annual World of Bluegrass convention, running Sept. 27-Oct. 3 in Nashville, which also includes Fan Fest (Oct. 1-3), and the International Bluegrass Music Awards Show (Sept. 30). The theme for World of Bluegrass 2010 is “Face Time. It Matters,” highlighting the importance of relationship building.

Tickets to all World of Bluegrass events are available at IBMA.org, or by calling 1-888-GET-IBMA.  For discount rates on accommodations, call the event housing bureau at 1-877-259-4716.