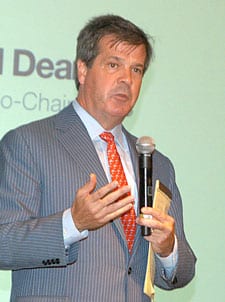 The Nashville Music Council is made up of 50 of the industry’s most experienced players who are working with Mayor Karl Dean’s office to turn this city into a “Global Music Capital.” After a year of assessing the situation, the Mayor and Music Council leaders presented their goals to a group assembled at the W.O. Smith Music School Tuesday (6/29) afternoon.

The Mayor organized the council to spur communication between the industry and the government; to work together to build Nashville’s brand as Music City. Council head Mary Ann McCready credits him with unprecedented efforts in reaching out to the music industry.

McCready said that the Council quickly realized one of its main functions would be as a place for “ideas to land and be vetted and implemented.” Dean highlighted the Music Council’s four focuses: music education, branding and jobs, live music, and creative talent. “Nashville’s music business attracts the kind of creative people our city needs to build a strong future,” he explained.

As co-head of the Branding and Jobs subcommittee, Mark Montgomery is also honed in on the future. “Nashville has the potential to be the epicenter of the new music business,” he said. One way he wants to achieve that is to nurture the relationship between music and technology.

Tim Dubois, co-head of the Creative Talent subcommittee, explained his group’s initiatives which include starting a one-stop resource center for those interested in relocating to Nashville, and then providing them with a support infrastructure once they arrive, such as housing. To that end, meetings with the Metro Development and Housing Authority have already taken place. Helping people maintain employment is another focus. However, during the Q&A, a struggling musician in the crowd questioned how the city can support an influx of more creative types when many who are already here are struggling to make a living.

Rod Essig’s Live Music subcommittee exemplifies the diversity of the Council, and is made up of genre-spanning artists like Emmylou Harris, Kix Brooks, and Jack White and industry stalwarts such as producer Tony Brown. Essig noted that a variety of genres already host annual conferences and festivals here, and for three years starting in 2011, Nashville can add the National Folk Festival to that list. He touted the city’s desperate need for an amphitheater for outdoor summer music, as well as the need for a 1500-seat venue, adding that the latter void could be filled as early as six months from now. As for immediate progress, the Council’s Musician’s Corner opens July 10 at Centennial Park.

Essig noted that sponsorships and partnerships would be important to many of the Council’s projects, and Music Education subcommittee head Nancy Shapiro has already scored in that area. She raised enough funding to hire a consultant for her cause, which is to make Nashville public school music education the best in the world. “When we found the right people to achieve this, and brought them to the table,” she said, “the energy was palpable.” She admitted she was preaching to the choir, but still explained the importance of music education, specifically to lowering the drop-out rate. One way to do this she added “is to reach kids where their interests are, with a variety of genres and options.”