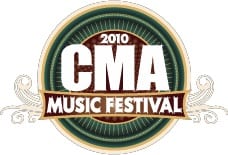 CMA Music Festival officially runs June 10-13, but events for fans start as early as June 8. Here’s a run-down of some of the events sent to MusicRow. If you would like your event to be listed, please email [email protected]

••The Country Music Hall of Fame® and Museum has special programming on the docket. During June 8-13, Museum visitors will be able to attend autograph signings and/or performances featuring some of country music’s most popular artists. Live from the Museum Store, Presented by CMT, will include autograph signings with Dierks Bentley, Diamond Rio, Danny Gokey, Jake Owen, Josh Turner and Trisha Yearwood, and a performance by and autograph signing with Cherryholmes. The Museum will also present a special Songwriter Session with Jeffrey Steele. Details at www.countrymusichalloffame.org.

••The R.O.P.E. (Reunion of Proffessional Entertainers) Spectaclur will be Wed. June 9, 7 p.m. at the Al Menah Shriner’s Temple in Nashville. It will be hosted by Keith Bilbrey with performances by Lorrie Morgan, Crystal Gayle, John Conlee, Charlie McCoy, Tommy Cash, David Frizzell and more. Adult admission is $20, and children are $10. A portion of the proceeds will be donated to flood relief. For details call Leslie Elliott at (615) 860-9257. Ticket orders can be sent to  R.O.P.E., PO Box 2048, Madison, TN 37116.

••Darryl Worley’s fan club party is set for Tuesday, June 8 at The Stage on Broadway. Doors open at 11 am, followed by a performance and autograph signing.

Among the other previously announced events are: