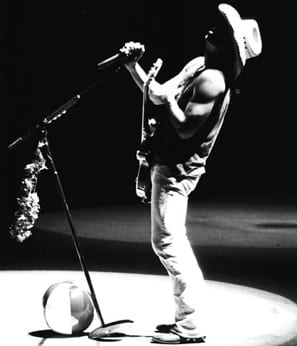 Kenny Chesney has teamed with Kmart for exclusive nationwide distribution of his “Kenny Chesney: Summer in 3D” movie. The 2-D version is available for preorder on DVD and Blu-ray at Kmart.com, and will out in Kmart stores on June 13.

In more Chesney news, he opened a two weekend stand at the Las Vegas Hard Rock Hotel & Casino club The Joint on Friday night (5/14). His freewheeling shows were streamed live on his No Shoes Radio, and—true to his Keg in the Closet style—showcased hits, gems and cover songs.

Chesney spent more than four hours on stage Saturday night. “We knew we were gonna be putting it up for another month, so we figured we’d go as long as they stayed… and we hit everything!” he says. “I did ‘Hungry Heart’ acoustic… We played ‘I’m Alive’ for the first time, and ‘You Saved Me,” half the Be As You Are record… a buncha covers form the Violent Femmes to Steve Miller… and we went and we went and they stayed and they stayed, and then we played some more.” Chesney returns to the Joint on July 2-3.