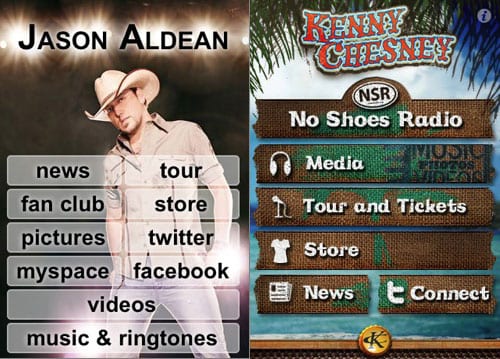 Kenny Chesney and Jason Aldean are the latest artists to offer iPhone/iTouch apps to droves of tech savvy followers.

Fans can use the applications to get news, updates and purchase concert tickets. Both musicians are giving them away for free.

“It’s a good way to put your songs and tour directly in your fans’ hands,” says Chesney, who bought iPhones for his touring crew when the device first came out.

Chesney’s app debuts as his current single, “Ain’t Back Yet,” is set to hit digital retailers on March 2. Designed by Aloompa, the app includes his No Shoes Radio, a merch and music store, photo galleries, videos and Twitter capability.

Aldean’s app by Moonshadow eCommerce comes as he releases his fourth single from his Platinum album Wide Open this week. He says “Crazy Town” “is all about the love-hate relationship that every new artist has with Nashville when they’re just starting out…I’ve been playing this one to kick off my live show, and the fans go nuts when they hear the first guitar lick.”

Aldean’s tour has been selling out arenas and setting attendance records. In the past nine months, he has scored three consecutive multi-week No. 1’s (“She’s Country,” “Big Green Tractor,” “The Truth”) spending a total of eight weeks at the top spot, more than any other country artist in the last year.