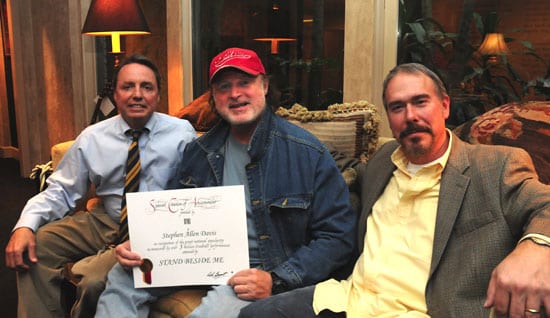 Longtime Music Row publisher Mark Brown and songwriter Stephen Allen Davis recently stopped by BMI to affiliate their new publishing venture, Molet Music. While the two were in the organization’s Music Row offices, BMI’s Jody Williams surprised the Grammy-nominated Davis with a Million-Air certificate recognizing more than 3 million performances of his composition “Stand Beside Me,” recorded by Jo Dee Messina. The song marks just one of Davis’s accomplishments as a songwriter: The impressive list of artists who have recorded his work also includes Frank Sinatra, Joe Cocker, Meatloaf, Tom Jones, Alabama, Reba McEntire, and Charlie Rich.