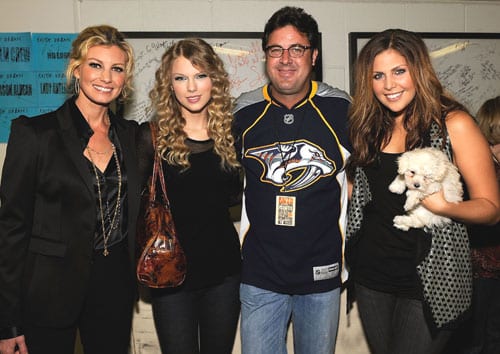 9 star acts. 14,000 screaming fans. $500,000 raised and counting. By all accounts Keith Urban’s first We’re All For The Hall concert was a dazzling success. The event benefiting the Country Music Hall of Fame and Museum was held last week (10/13) at the Sommet Center, and featured Urban, Vince Gill, Taylor Swift, Faith Hill, Brad Paisley, Dierks Bentley, Jason Aldean, Lady Antebellum and Little Big Town. Thanks to the superb line-up and tickets priced around the $30 mark, the show sold out quickly.

Proceeds have crossed the half-million dollar mark and are expected to grow with the addition of corporate donations from 70 companies, and the auction of a Taylor Swift guitar.

Among those donors are Verizon and Samsung who provided an online broadcast of the concert that was seen by nearly a million fans. In addition to watching from home, “Fans came from all over the United States and as far away as Canada,” said Museum Director Kyle Young. “Many took the opportunity to visit the Museum. We credit this unprecedented exposure for bringing twice as many tourists into the Museum than is usual on an October Tuesday. Museum attendance during the days following the concert put the week in the ranks of the top ten since we opened in May 2001.”

“To those on the stage and behind the stage, to all of the corporate partners who gave so generously, and to all of the fans who made the night what it became,” said Urban, “thank you from the bottom of my heart. I’ve never been so moved by the power that music has to bring people together, not only to share an experience, but to do such good in the process.”

The Urban and friends show is becoming an annual fundraiser and a date has already been set for next year’s We’re All For The Hall—Oct. 5, 2010.

Gill, who serves as president of the Museum’s Board of Officers and Trustees, created the All for the Hall fundraising initiative which encourages artists of all levels to donate one night’s take to the institution.