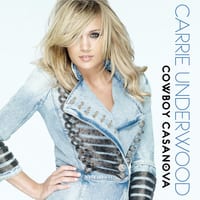 Superstar Carrie Underwood has the nation’s No. 1 country digital single as “Cowboy Casanova” scored first-week sales of more than 110,000 copies, according to Nielsen SoundScan, a division of The Nielsen Company. With this achievement, Underwood remains the only solo country artist this year to debut a digital single above the 100,000 mark. It’s the second time she’s accomplished this feat in 2009, having also hit the six-digit mark with this season’s American Idol farewell theme, “Home Sweet Home.”

“Cowboy Casanova” is the lead single from her Nov. 3 Arista/19 Recordings release, Play On, and is the fastest rising single of her career. The music video debuts  tomorrow (10/2) as part of CMT’s multi-artist “Big New Music Weekend” of nine exclusive video premieres. Fans can also look for the video beginning tomorrow on CMT.com, and CMT Pure.

A four-time GRAMMY Award winner, ACM Entertainer of the Year, and reigning, three-time CMA and ACM Female Vocalist winner, Underwood re-teamed with producer Mark Bright for the new album. He also helmed her Carnival Ride collection as well as seven tracks from her 2005 album debut, Some Hearts. To date, Underwood has amassed more than 10 million in U.S. album sales with Some Hearts and 2007’s Carnival Ride.