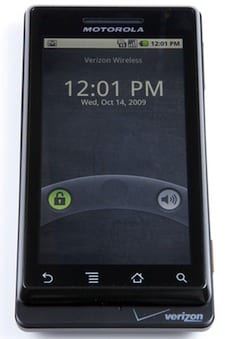 It’s called Droid and it’s coming on strong, directly challenging the iPhone. Scheduled to be available on the Verizon network as early as Oct. 30, the new phone, which runs the Android 2.0 operating system is a technology partnership between Motorola, Verizon and Google.

Some of the new handset’s features include a 3.7-inch touch screen, a slide-out QWERTY keyboard, 5-megapixel autofocus camera with flash, Wifi, bluetooth 2.0 and GPS. According to BoyGeniusReport.com this is the best Android phone yet with “an amazing screen.” BGR also states, “It’s the Android device to beat, and easily the most impressive. From what we’ve been told, Google had a direct hand in the Motorola Droid. Something to the point of almost dictating every move Motorola made when designing and making the phone.”

Techcrunch’s Michael Arrington offers this analysis. “Make no mistake, this is Android’s flagship product, and the first phone that will pose a significant threat to Apple’s iPhone.”

The continued rise of smartphones is good news for the entertainment industry, since the new hardware tends to boost consumption of movies, music, TV and web data.