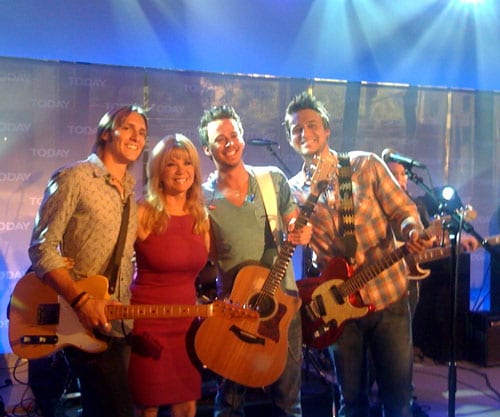 In addition to their Friday (8/21) performance of their Top 20 hit “Runaway” on NBC’s Today Show, Love And Theft can be seen in coming episodes of CMT Insider, CMT Top 20 countdown, GAC’s Headline Country and GAC’s On The Streets.

Release week for the Carolwood Records album kicked off with a performance at a radio station show in Atlanta Sunday night after which the band returned to Nashville for four days of satellite radio tours, set to stream live on AOL’s “The Boot.” The remainder of the week will include a visit to Sirius XM’s Music Row Happy Hour along with more satellite radio tours, radio station visits and concert appearances in Houston, Dallas, Phoenix, and Las Vegas.

Various stores will have different limited edition versions of World Wide Open. Stephen, Brian and Eric spent tens of hours on buses, airplanes and in hotel rooms autographing the signature edition that can be found in Target stores. At Wal-Mart and walmart.com the album will contain a code to download demo/acoustic versions of three songs. And the CDs at Best Buy will contain a poster of Love And Theft inside the package.

Online outlets will also offer up some love from Love And Theft. At iTunes fans who download the full album will receive two previously unreleased bonus tracks. Amazon will offer up a bonus track as well.

Love And Theft has also created an exclusive website for its first record. With a visit to www.worldwideopencd.com, fans can preview and pre-order the album, access free Love And Theft wallpaper and buddy icons, participate in a “Tweet Your Love” contest and register for a wake up call from the band.

Fans can also text the word ‘WAKEUP’ to 66937 on their cell phone to register to receive a phone call from the band on Tuesday morning, release day. Love and Theft even made a commercial for the album, and the code can be found at www.youtube.com/loveandtheft.