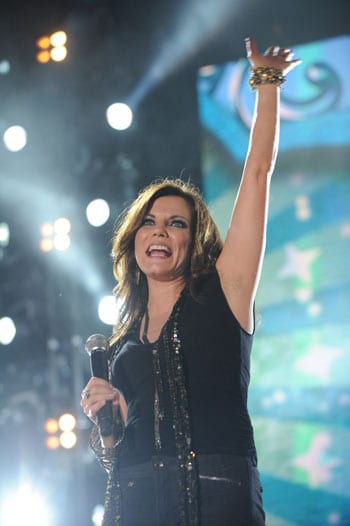 Martina McBride was one of the numerous performers on last night's show.

CMA Music Festival: Country’s Night to Rock won last night’s (8/31) ratings for ABC with 7.8 million viewers according to Zap2It.com. It came in first at both the 8 and 9 PM/ET slots, and second at 10 PM.

Year-to-year ABC’s CMA Music Festival special posted huge increases, jumping by +2.5 million viewers and by +43% over its year-ago telecast (on Monday 9/8/08). In fact the show generated its biggest audience in four years and tallied its highest Adult 18-49 rating in three years.

The program was up against repeats on all the other networks. On CBS it was How I Met Your Mother, Two and a Half Men, The Big Bang Theory, and CSI: Miami. NBC was showing reruns of Law & Order: Criminal Intent and Dateline NBC. FOX had repeats of House and Lie to Me, while CW showed One Tree Hill, and Gossip Girl.