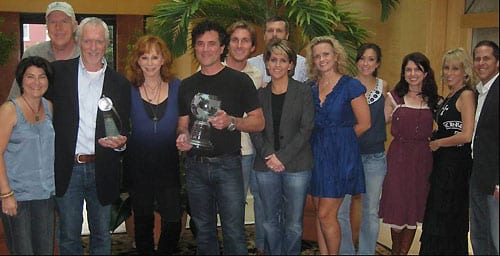 Reba McEntire’s new album, Keep On Loving You, holds steady at the top of the Billboard Top Country Albums Chart for the second week in a row. Reba’s first solo studio album in six years—and her first on new label The Valory Music Co.—remains in the Top 10 on the Billboard Top 200 Albums Chart, landing at No. 6.

Reba’s new single, “Consider Me Gone,” is rising as she travels to Los Angeles this week for some big media appearances. She is set to perform on The Tonight Show with Conan O’Brien tomorrow (9/9), and she will join Craig Ferguson for an interview and performance on The Late Late Show on Tuesday, Sept. 15. Reba will also drop by the syndicated Bonnie Hunt Show on Tuesday, Sept. 15, and is the subject of a new A&E Biography premiering Thurs., Sept. 10 on the Biography Channel.